Of Gods and Men: Jack Cardiff and Cameraman 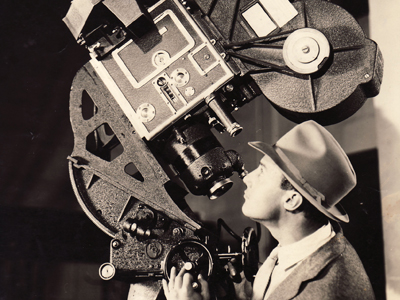 It would be both needless and unfair to criticize Craig McCall’s new documentary Cameraman: The Life & Work of Jack Cardiff for its relative lack of cinematic imagination, no matter that it’s all the more ironic in light of its subject’s masterly command of the medium. Though the imperative of paying deserved tribute has been used to justify any number of aesthetically underwhelming, opportunistic or distorting films, that imperative is still valid—and perhaps dispiritingly, the familiar stock of documentary conventions often prove perfectly adequate to the task. So this chronicle of Cardiff’s eight-decade career as one of the world’s most renowned cinematographers duly deploys the usual stock of Hollywood-luminary testimonials (Martin Scorsese, Kirk Douglas, Lauren Bacall, Charlton Heston, Richard Fleischer), copious clips, late-in-long-life salutes at Cannes and the Oscars and an engaging wealth of personal reminiscences to complacently satisfactory effect.

Yet for all its understandable warmth towards one of the medium’s master craftsmen (aided considerably by the 91-year-old Cardiff’s little-old-man likeability), its general air of anodyne inoffensiveness and innate forgetability, Cameraman inadvertently raises some interesting issues around the question of cinematic authorship. This is not of course to say that recognizing the extraordinary contributions of cinematographers to the classical cinema causes an undue problem for the auteuristically-minded, even if the implications of that recognition are rarely unpacked in detail. Nor have cinematographers been overly lacking for their due: such aggressive self-promoters as Gregg Toland and John Alton were only the most vocal in asserting the cinematographer as an artist in his own right, and this at a time when the view of the director-as-artist was limited to only a select few anointed figures. Though evidently cut of more modest cloth, Cardiff’s lucid and charming anecdotes about the making of a half-century’s worth of major films testify amply not only to his status as genuine co-creator (or, for less notable items, primary creator) of much that’s best in the films on which he worked, but to his role in advancing the expressive language of the cinema.

It helped, of course, that Cardiff’s first assignment as sole cinematographer after his early ‘40s apprenticeship as a roving Technicolor traveloguer was with Michael Powell. After introducing a gritty realism and bracing authenticity into British cinema with The Edge of the World and his wartime on-the-run pictures 49th Parallel and . . . One of Our Aircraft Is Missing, Powell was now looking to expand the scope of the fantastic on screen and to find a way of articulating interior states through ostentatiously heightened visual design. To run over Cardiff’s legendary collaborations with the Archers is almost redundant, but due diligence demands: the delightfully witty delineation between a shimmering black-and-white afterworld and a Technicolor reality (and a slyly self-reflexive acknowledgment of same) in A Matter of Life and Death; the soundstage Himalayas of Black Narcissus, its brazen use of colour as a signifier of emotional intensity, and the near-camp but undeniably powerful transfiguration of Kathleen Byron’s sex-crazed killer nun into an ashen-faced Gorgon; and of course the full-spectrum freak-out of The Red Shoes, residing somewhere between the exquisite and the hysterically vulgar (or vice versa).

The making of these three films occupies a good quarter or more of McCall’s documentary, for obvious reasons. Not only is the Archers triumvirate one of Cardiff’s most immediately striking achievements—duly serving as the backbone of the miniature Cardiff retrospective on view at Bell Lightbox—it also offers the most pronounced case for his status as author. Unlike The Life and Death of Colonel Blimp, which leavened its dynamism with deflating wit and rich characterization—and which Powell in his autobiography mildly denigrates as “an old-fashioned film”—AMOLAD, Black Narcissus and The Red Shoes were increasingly assertive stylistic experiments/experiences that placed the drama (nicely turned though it is in all cases) below the films’ status as spectacular objects. (One could even call them gimmick films to a certain extent, in the manner of Rouben Mamoulian’s weighty exercises in the early ‘30s—cf. the subjective camera antics of Dr. Jekyll and Mr. Hyde, the steroidal Lubitschisms of Love Me Tonight—though on a far higher level.) The invisible artistry that was the (partly mythical) norm of classical cinema here gives way to a bold foregrounding of artifice, and draws due attention to the labour of that corps of artificers who have fashioned it.

It’s thus that the Archers films and select other esoteric, super-stylized items—Albert Lewin’s delirious Pandora and the Flying Dutchman, or The Barefoot Contessa, where Joseph L. Mankiewicz’s professionally acidic dialogue is engulfed by luscious Technicolor waves—become the prime pieces on display in Cameraman’s Cardiff gallery, those works on which his signature is most plainly evident. And yet for all the many examples of Cardiff’s mastery and the familiar equations of cinematography with painting, there is a curiously everyday air around the film’s presentation of Cardiff—one that emanates from a discursive rather than an observational vantage point. Compare the hallowed aura that infuses comparable portraits of great directors—those mystically-tinged reservoirs of secret wisdom—with the folksy, Sunday painter-like persona the film ascribes to Cardiff, and it is evident how difficult it still is to accommodate other film craftsmen as autonomous artists within a predominantly director-dominated view of cinema. That this afflicts cinephilic discourse no less than the kind of film-buff view embodied by Cameraman indicates how difficult it still is to find a language that can adequately explore the work of artists like Cardiff.

Speaking of which, it’s telling that the film’s other organizing principle is an anecdotal, gee-whiz wonderment at the range of famous names Cardiff has worked with over the years: Humphrey Bogart and Katharine Hepburn (The African Queen), Kirk Douglas and Tony Curtis (The Vikings), Audrey Hepburn and Henry Fonda (War and Peace), John Wayne and Sophia Loren (Legend of the Lost), Laurence Olivier and Marilyn Monroe (The Prince and the Showgirl), all the way up to Arnold Schwarzenegger (Conan the Destroyer) and Sylvester Stallone (Rambo: First Blood Part II). It’s these brushes with stardom that provide most of the frisson in the film, far more than Cardiff’s partnership with the numerous directors he’s worked with; far more as well than Cardiff’s own directorial career, which receives a desultory five-minute detour highlighted by his well-received Lawrence adaptation Sons and Lovers. Indeed, one of Cameraman’s emblematic moments (foregrounded in the film’s publicity materials) is the sequence where Cardiff displays the enlarged studio photos he took of assorted Hollywood beauties— Monroe, Loren, Audrey Hepburn, Anita Ekberg—“over lunch hours” during productions. “Some people collect postage stamps, I collected beautiful women—in picture form, anyway,” Cardiff remarks as he flips through his portfolio. 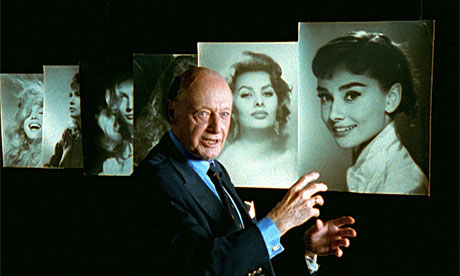 The strange result of this well-deserved tribute to an exemplary artist is that the artist himself becomes something of a viewer surrogate for a vicarious tour of movie lore. For all his tremendous accomplishment, all his standing as an artist in his own right, Cardiff in Cameraman is like a mortal granted audience in the halls of the gods, as signalled by the opening and closing sequences at the Academy Awards in 2001 where Cardiff accepts his honourary Oscar while the ranks of Hollywood royalty rise to salute him. Its good intentions aside, Cameraman is organized around a film-world discourse that measures achievement by celebrity—and lest those of us on the snootier side of things become too complacent, it’s disturbing how so much of our analysis around the comparably lofty figure of The Director can still bear uncanny resemblance to icon worship.