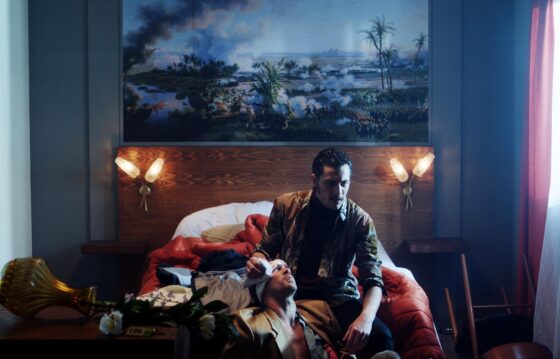 After a number of impressive short films and one documentary hybrid feature, the 2013 Tonight and the People, French artist Neïl Beloufa offers Occidental, the closest he’s yet come to a conventional feature film. As is often the case with art-world figures and quasi-experimentalists who likewise go for the gold (cf. Isaac Julien, Ngozi Onwurah, Cindy Sherman), the results are mixed but never less than intriguing. Ostensibly the story of a very ’70s-looking gay couple (Idir Chender and Paul Hamy) who arouse suspicion upon checking into the honeymoon suite at the Hotel Occidental, Beloufa’s film is primarily a study in atmosphere and mise en scène. Although initially resembling late Fassbinder efforts, particularly Querelle (1982), look closer and you’ll see that the stilted, high-toned Euro-sleaze of Werner Schroeter is actually the presiding spirit here.

But despite the deep shadows, exotic gewgaws, and lacquered walls of avocado and taupe, Occidental cannot quite capture that sense of free-floating decadence that defines Schroeter’s cinema. In this regard, Beloufa joins other contemporary French auteurs like Yann Gonzalez and Patric Chiha, artists who present but a theoretical approximation of a now-lost moment, when gay male desire still exuded the thick, viscous ambiance of post-Genet danger. What Occidental offers instead is a collection of perplexing human relationships reducible to types: the pseudo-suave continentals, the uptight xenophobe with her own issues, the naïve sexpot, the Arab struggling to fit in with his adoptive country. For his part, Beloufa moves them around in predictable ways, generating abstraction by eliding much of the characterization that would produce recognizable realism. In this way, he allows the funky, fraudulent space of the hotel set to assert itself, filling in the gaps. As strategies go, it’s not a bad one. Nevertheless, it’s hard not to feel the auteur working the angles throughout the film, and the result is a bit like fucking on graph paper.