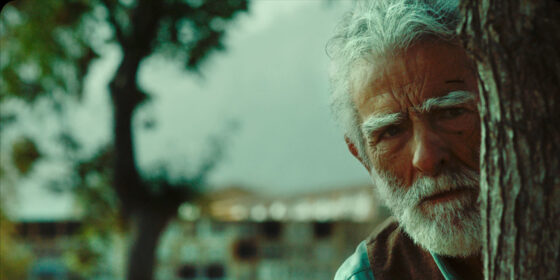 An elderly morgue attendant at a huge urban cemetery (Juan Margallo) is working late one night when a political protest gets out of hand, resulting in the secret police bursting into the morgue to hide the bodies of the protesters they’ve killed. Later, when the authorities come back to clean up the mess, they leave one young woman’s body behind. The morgue is about to be shuttered, and no one really cares whether or not this girl is attended to. (Several meetings with administrators are appropriately Kafkaesque.) But the old man will not rest until this final body is somehow accounted for.

Director Alireza Khatami’s intent here is fairly clear: before the book is closed on 20th-century Chilean history, the morgue attendant wishes to use this “extra” body as a kind of Tomb of the Unknown Victim. However, Oblivion Verses wavers between specificity and a kind of surrealist typicality. Pinochet is never mentioned, and only very late in the film do we learn that the old man has “skin in the game,” as they say, and is not just a fussy bureaucrat.

As political cinema goes, Oblivion Verses is rather dull-edged; in some respects its intent is patently obvious, in others rather oblique. There seems to be an allegory at work here, but it’s difficult to separate that broader, symbolic approach from a nagging sense that there is specificity hovering in the margins, unwilling or unable to speak its piece. It seems Khatami originally wanted to make the film in Iran but couldn’t get permission, so the Chilean setting was a second choice. This knowledge perhaps opens Oblivion Verses to unfair scrutiny, but I think it explains its formal inconsistencies. Khatami’s resuscitation effort is indeed admirable, but noble intentions do not necessarily equal enlightenment.