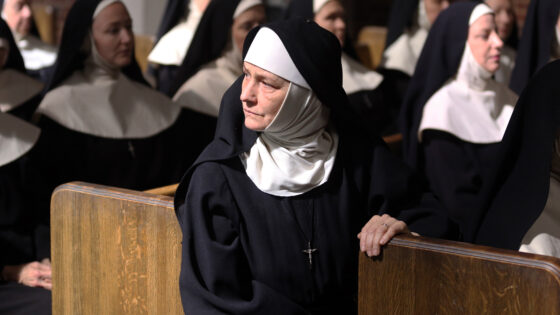 With Novitiate, director Maggie Betts creates a dramatic portrait of a 1960s convent during the reforms of Vatican II. Following a group of novices as they enter the church, Betts manages to capture a youthful intensity to feverishly convey a multitude of psychological, as well as societal, concerns.

Protagonist Cathleen (Margaret Qualley) becomes enamoured of the unconditional love the Church offers in the face of her hectic upbringing by a single mother and a lonely school experience. Her intense desire for love is soured by the power-crazed Reverend Mother (Melissa Leo), who promotes suffering while subjecting her novices to public humiliation and literal self-flagellation. The hyper-passion of the “love” that brings the novices to the church—all of them sublimating the sexual, romantic, and platonic into a love for God—is sharp and exciting, while Leo’s shrilly camp Reverend Mother battles against this need for love with her own need for dominance. The convent itself is filmed beautifully, framed to exaggerate its overpowering and all-consuming presence as it dwarfs the girls or cloaks them in austere shadows.

Betts’ visual flair is as solid as her dramatic touch, but Novitiate’s episodic nature is akin to stray thoughts which pop into your head and disappear just as fast. The film’s strength is in its focus on desperation and desire, made vivid by the possibilities of the convent as insular locale where strict and perverse structures of authority can flourish. The battle between love and power becomes unfocused across multiple vignettes which are only half-resolved. While Novitiate has many strengths, its lack of focus feels like a product of the feature-length format. Betts might have made a great miniseries; instead, her film, while skillful, ultimately feels stilted.