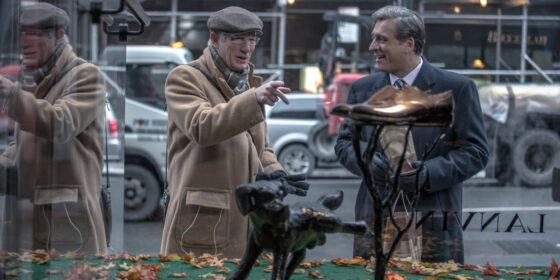 Anyone who’s ever felt like a fraud will find much to relate to in Joseph Cedar’s tale of personal bankruptcy, the spectrum of identification spanning the exhilaration of getting away with it to the humiliation of being exposed. The architecture of influence and exploitation is the stuff of which movies are made, and that this is often how they get made isn’t entirely lost on Cedar, whose transition to an American production no doubt bears some parallels to the social politics portrayed in Norman’s hierarchical chain (hastily diagrammed on a napkin by Richard Gere’s Norman Oppenheimer at the film’s outset). Norman deftly negotiates this sphere of influence as both a diverting parable and caustic tale, situated within the milieu of New York Jewry—conspicuous to anyone involved (anyone who knows someone who knows someone), while utterly foreign to those unversed in the vernacular of acerbic kvetching.

As evinced in his previous Israeli feature Footnote (2011), Cedar is an adept chronicler of interpersonal relations and the social structures that inhibit or enable them. Here he yokes together two men grasping at upward mobility but from radically disparate rungs of the ladder, one “trying to keep his head above water” while the other can’t bear to “shake another hand.” The film choreographs their fated first meeting from behind a shop glass window, and the near-silent exchange speaks volumes about the clinging pursuit Norman will undertake to insinuate himself into the life of an important Israeli deputy (the forearm clasp being among the fixer’s trusted “strategies” of forced attachments), an act of leveraging that could see the interloper’s stock rise in a virtually invisible, but highly influential, market. The incorrigibly insistent Norman (pathetically inhabited by Gere, playing against type) bets, for once, on the right horse, his wagon fortuitously hitched to the future prime minister. “Who says simple is good?” declares Norman, ascending the ranks of high-finance dealmaking and, implausibly, Israeli politics, all while firmly ensconced in a camelhair overcoat during successive New York winters, permanently attached to his cell-phone headset while seeking refuge in a perpetuum of vestibules. Cedar scores Norman’s brush with an out-of-league experience as a comedy of errors, though there is something wistful in watching Norman try to succeed and something perverse in wanting him to. The idea of a self-realized insider with a dubious wealth of connections is no longer much of a farce in the social-mediated age, so Norman’s unmasking comes as a kind of welcome caveat. “He’s a nobody,” declares Norman of the unidentified shady businessman who threatens to dismantle the Israeli’s campaign, and the irony of self-implication is there for all but himself to see. A decade ago Cedar may have left such a parasite out in the cold, but this being New York, and this being the movies, someone probably called in a favour. Still, the takeaway—that emotional avarice is indeed an expense, that when it comes to indebting ourselves, we are all anonymous donors—is an affiliation we can’t afford to ignore.