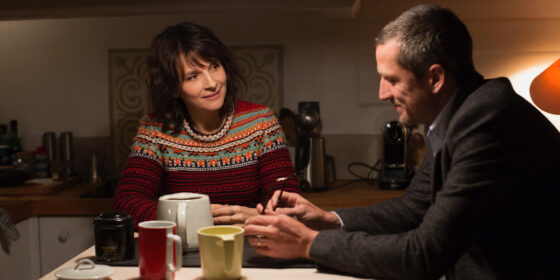 Non-Fiction is an elegantly crafted exploration of society on the cusp: looking towards a virtual future, longing for a material past. Even the film’s production manifests its philosophical aims: the grainy, predominantly Super 16mm images insist on a material vision of the world that glows with specificity. Delightfully and unapologetically intellectual, Olivier Assayas’ latest considers the implications of digital culture as well as more venerable questions of literary form and authorship. The story focuses on two middle-aged, middle-class Parisian couples living double lives while also experiencing a larger crossroads in life: established publisher Alain (Guillaume Canet) struggles with keeping traditional print culture economically viable, while his wife, successful actress Selena (Juliette Binoche), contemplates leaving an extremely popular TV series that bores her. Selena’s lover Léonard (Vincent Macaigne), who is also one of Alain’s authors, fights literary obsolescence while ineptly trying to counter accusations of bogus and transparent narcissism with a more legitimate notion of auto-fiction; meanwhile, Léonard’s wife Valérie (Nora Hamzawi) pushes back against the elitism of a Parisian culture whose supposed cosmopolitanism really belies a complete ignorance of the world outside its borders. Finally, Alain’s co-worker and mistress Laure (Christa Théret) represents a younger generation obsessed with numerical algorithms while secretly harbouring a deep attraction to the literary past.

As both its French (Doubles vie) and English titles suggest: why choose? Double lives and nonfiction invite multiplicity and the play of opposites: why shouldn’t print culture remain viable in a digital world? The film conducts a deconstructive and freewheeling conversation about this topic, engaging playfully in postmodern musings: Alain remarks to Léonard that Twitter is just another version of the tradition of French esprit, and Léonard attempts to transform his banal experiences into hip edginess by referencing a Haneke film. But while it has fun with witty and scathing insights into contemporary culture, at its heart Non-Fiction is about faith. Alain’s reference to Winter Light (a film by one of Assayas’ favourite directors) suggests that faith in the written word remains a usable past, offering an optimistic belief that material forms will persist. Non-Fiction shares, incidentally, an allusion to Winter Light made by another recent film: Paul Schrader’s First Reformed, whose exploration of a conflicted present is equally invested in preserving our spiritual and intellectual inheritance. Both films seem to find hope in a much younger generation: one of the many statistics scattered throughout the film notes that children are one of the largest groups of library users. Non-Fiction reminds us that no matter how much big business tries to identify trends and manage its audience, the future remains unpredictable.