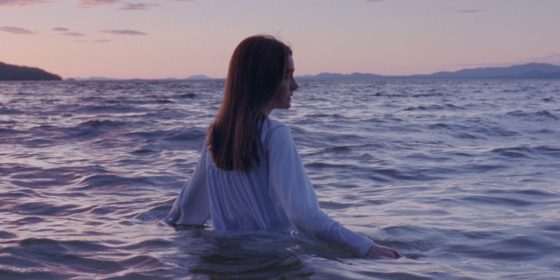 Determining the sum total of Kathleen Hepburn’s formally accomplished feature debut is daunting arithmetic. Protagonist Judy, a longtime sufferer of Parkinson’s disease, lives with her husband and 18-year-old son in warm domesticity. The film’s opening moments deliver a soft, rose-coloured naturalism, but a prologue delivered in voiceover establishes loss and vulnerability as familial bedfellows while recurring water motifs suggest stoicism and courage in facing what’s inevitably to come. Indeed, it’s courage the clan will need as the narrative throughline of degeneration strengthens: Judy must go it alone when her partner dies and son Jamie, who has taken work in the Albertan oil fields to appease his parents, grapples with virulent spectres of masculinity as he confronts queerness, responsibility, and definitions of manhood.

Undoubtedly, Hepburn’s filmmaking is sensible and serviceable; its formal and thematic connective tissues are strong. Still, I worry that the film delves into tragedy porn in its failure to give a solid sense of the characters beyond their relentless hardships. Shirley Henderson’s performance of Judy, while impressively committed, is the most prominent case study in this vein. Henderson’s affectations of Judy’s disease are physically brutal and—for better or worse—ultimately land as a harsh and relentless externalization of the tragedies she must bear; further, watching with the knowledge that what’s onscreen is an able-bodied person’s performance of a lived reality for Parkinson’s sufferers genuinely feels downright squicky at times. Curious, too, that the film insists on invoking queerness in its investigation of masculinity, but seems to later discard it with the introduction of a mysterious girl and a quaint, tidy resolution that at best invokes the manic pixie dream girl trope, and at worst effectively problematizes queerness by rendering it “fixable.” Early and ill-considered missteps, I hope, from a promising filmmaker.