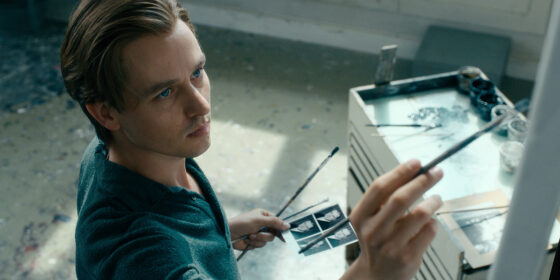 The childhood and early career of German superstar painter Gerhard Richter is given a very free rendering in this three-hour-plus drama that tries to short-circuit Nazi euthanasia programs with a crash course on postwar avant-garde art. Florian Henckel von Donnersmarck, director of the Oscar-winning GDR retaliation The Lives of Others (2006), now appears to be resolved to cover all of Germany’s abysmal 20th century with his films, with Never Look Away covering roughly three decades, from the early 1930s up until the construction of the Berlin Wall in 1961.

The always congenial Tom Schilling stars as Richter’s avatar Kurt Barnert, who is bullied and intimidated by a bigger-than-life Nazi villain (Sebastian Koch) who, unbeknownst to Kurt, had sent his beloved aunt to her death by a stroke of his pen and (after the war) happens to be his girlfriend’s strict father (Paula Beer). The talented young artist has to solemnly overcome socialist realism, and subsequently meets kinky modern art in the free West, guided by an eccentric professor who loves to work with fat and felt and believes everyone can be an artist (no, he is not called Joseph Beuys here, but looks, talks and walks like him). Finally, the evil forces are exorcized by a genuinely new “anonymous” art that fuses documentary realism and blurred memory—paintings that do not seem to even have an author, hence the German title Werk ohne Autor.

Donnersmarck’s over-explanatory directorial style sometimes verges on the hysterical, while at other times he absentmindedly tilts towards off-limits areas (he doesn’t even shy away from showing the interior of a gas chamber where mentally handicapped people are being murdered—and cross-cuts that with the bombing of Dresden!). He faces his task as if he were the hired helmer of a ’50s Hollywood movie, thereby producing a work of oldest conceivable fashion, a gloriously fake-sounding hymn to the power of Art and the devoted artistic mind that can miraculously overcome all obstacles: a film that is as anti-intellectual-friendly as it is glaringly, pathetically melodramatic.