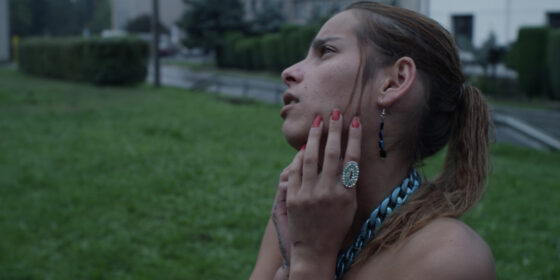 “Miserablism” has long been a term tossed around by lazy critics, mainly when they feel overworked at festivals, and aimed at movies they feel miserable having to sit through. Béla Tarr and Pedro Costa, to name two of the highest on the depth chart, have long been slapped around as “miserablists” by the lazy ones. Then again, there really are movies that teem with miserable characters in miserable situations and that leave the viewer with little choice but to feel just as lousy. Until a last-minute, half-hearted stab at a hopeful outcome for a couple of his characters, Petr Vaclav’s We Are Never Alone—a premiere in Berlin’s Forum and now in TIFF—fills it to the brim with grim.

At the centre are two neighbouring families in a modest town on the edge of the Czech woods. One is led by a nativist fascist dude (Miroslav Hanus) who would feel comfortable at a Trump rally, and works as a prison guard. The other includes a depressed wife and mom (Lenka Vlasakova) who runs her father’s convenience store and her hypochondriac husband (Karel Roden) who screams and whines when he isn’t examining and sniffing his stool for signs of sickness. The mom is somehow attracted to a boorish strip-club enforcer (Zdenek Godla) who spends most of his time either speeding down country lanes in his Benz or verbally and physically abusing hooker-stripper Sylva (Klaudia Dudova).

The nativist moans about the loss of the good old days under Soviet rule, and, without knowing that Vaclav has made fiction and nonfiction work about Romani culture, many viewers might be lulled into a false sense that the director shares the nativist’s dim view of contemporary Czech life. The narrative design is meant to present a social cross-section, but it’s impossible to accept such a world of 100% unhappy individuals—including, crucially, several kids (one of whom attempts to hang himself). This sort of stacked deck is misery-making enough; a noirish third act seems inevitable, with the shitty lives of every male on screen (except one) getting only shittier.