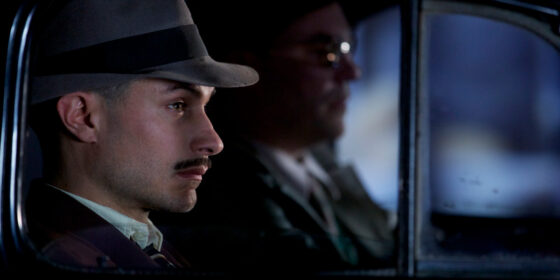 It is not easy to face a national (and even international) myth and emerge unscathed. Pablo Larraín, who has spent years confronting the ghosts of Augusto Pinochet’s dictatorship in his homeland of Chile, speaks in one of his two new films this year about one of the quintessential Chilean poets: Pablo Neruda, an aristocrat, communist, and bourgeois, a womanizer, lover and husband, a man both self-aware and self-centred. Neruda is set in 1948, in the days when the Chilean government of González Videla banned the Communist Party. Neruda (Luis Gnecco), in his role as senator, decided to confront the government publicly and thereby condemned himself to exile, first in his own country and later abroad.

Although the film draws a portrait of the poet (or the myth of the poet, his public and monumental figure) as a man obsessed with his public relevance and his fame, a man both contradictory and somewhat treacherous, debauched and somewhat cartoonish, Neruda is in no way a biopic or a historical reconstruction. If anything, it’s another chapter of Larraín’s series in which he pinpoints the supposed dark soul of his native country, painting a spooky portrait on the boundaries between history and representation, memory and fiction. The main plot of Neruda is not about the poet escaping from justice while he is at the same time playing with it and trying to increase his fame, but the love story between the poet himself and the police officer chasing him (Gael García Bernal). A sort of crime thriller, Neruda is an austral western about two characters eventually revealed as fictional, as liars: two characters, or a character in search of an author. But is there something more? Larraín’s previous films worked around this idea of national guilt, positing Chile as a sick, inherently fascist society where everybody is responsible for the ascension of the Pinochet dictatorship. This sort of bourgeois point of view is not so obvious in Neruda: rewriting the myth of a national figure as Neruda is, no doubt, a risky project—and the marketing of the film for its national premiere emphasizes more the thriller aspectt of the film than the biographical one—but below the game and the metacinematic reflection, there’s still an intellectual disdain. The film plays with the myth, creates a darker version of the poet, in order to do…what?