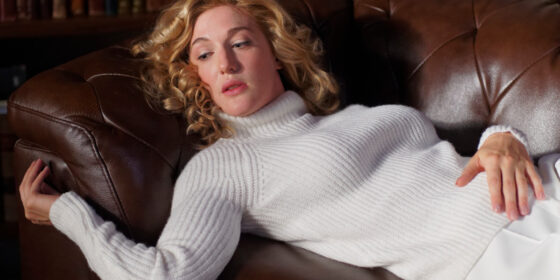 Curiously placed in Vanguard despite a biopic pedigree seemingly guaranteed a spot in the bottomless pit of the section known as Special Presentations (unless the programmers of Midnight Madness’ “cooler older sister” thought sexploitation was the “genre” supposedly being turned on its head), Nelly is, regardless, a case of a film that defies labels. The biographical figure in question is one of Québec’s most notorious literary figures, Nelly Arcan (Mylène Mackay), who wrote a series of novels in the early 2000s functioning as a stealth account of her years spent as a call girl. Amalgamating Arcan’s works, Anne Émond’s film “adaptation” doesn’t come off as a summary of its subject’s life so much as an attempt to perform a feminist séance of sorts—to reposition Arcan not as a scandalous lady of the night but rather as a woman who was ultimately punished for her agency and ambition.

Forgoing linearity and oscillating between reality and fantasy, Nelly gives us the title character as a little girl, teenager, punk, whore, socialite and celebrated writer, essentially playing dress-up through a number of time periods and scenarios. Not pinning her central figure down to one particular psychological mode, Émond doesn’t quite make something that adheres to either the comic surrealism of Belle de jour (1967) or the cold “cash rules everything around me” mantra of The Girlfriend Experience (2009), to name two other celebrated sex-worker narratives.  Yet by deftly challenging the biopic’s often faulty dramaturgical requirements by being open about its lead as a symbol and not a character, it succeeds on its own intellectual terms.