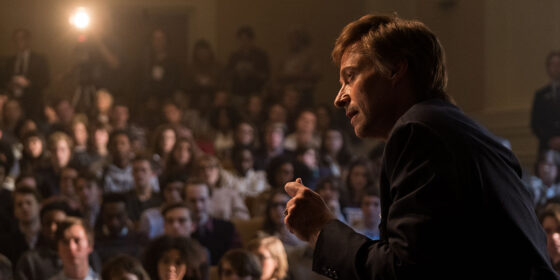 The second movie in as many award-season cycles to feature scenes depicting the inner workings of The Washington Post, The Front Runner stakes out its distance from Steven Spielberg by painting even charter members of the fourth estate as carrion-scarfing jackals; (insanely) cast as Ben Bradlee, Alfred Molina cynically justifies his newspaper’s decision to pile on disgraced Democratic party poster boy Gary Hart (Hugh Jackman) as an adapt-or-die move. In place of Tom Hanks’ protests in The Post that a breaking story can make positive change the world for the better, Jason Reitman’s film pillories the media for opportunistically taking down potentially transformative figure.

There’s the makings of a resonant media critique here, but as in his debut Thank You For Smoking, Reitman mistakes glibly cornering all sides of the argument for complexity, on top of which some unfortunate writing and directing decisions make it seem like Hart was more of a victim—of unscrupulous editorial finagling and misguided ethicism (the latter bound up in the entirely fictional character of a fatally idealistic African-American beat reporter who’s as imaginary as Tully) and feminist finger-wagging—than an avatar of proto grab-em-by-the-pussy privilege. If everybody could have just turned a blind eye, it seems to say, we wouldn’t have gotten George Bush I (or II, or the Rise of the Vulcans, and so on), which is a facile analysis, and it’s not as if the warmed-over Altmanisms of the film’s style (roving cameras; overlapping dialogue; gifted character actors pinging each other with zingers) are all that pleasurable in an intellectual vacuum. The film is also too obviously acted by Jackman (whose milquetoast charisma feels half-hearted here), boring despite its percussive pacing and pretty much sexist across the board, with pity for Donna Rice (Sarah Paxton) haplessly confused with compassion by a team of three male screenwriters.