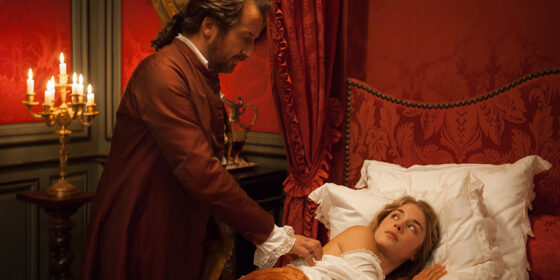 Loosely based upon a Denis Diderot story, Emmanuel Mouret’s Mademoiselle de Joncquières is a vengeance tale, dry and brightly lit to the point of wash-out. Taking place predominantly in estates in the French countryside, this period piece is about the repressed fury of a woman scorned, and the double standards of the libertine era.

Madame de La Pommeraye (Cécile de France), a beautiful widow retired from public life, is in the process of being slowly seduced by the notorious Marquis de Arcis (Edouard Baer). Despite warnings from a friend, she is taken in by him, and when his attention turns elsewhere, as she was warned, Madame ends the relationship. But this severing was to mask her own heart break, and in turn she begins her own seduction as retaliation. She finds Madame de Joncquières, a woman of her own class who was seduced and abandoned, having to turn to a life of prostitution with her daughter. Madame de La Pommeraye has Madame de Joncquières and the titular Mademoiselle de Joncquières (Alice Isaaz), act devout and religious, for the Marquis only desires what he cannot have. His obsession with the daughter, silent and beautiful, brings him to his ruin, as he offers more and more of his fortune to a prostitute he believes to be a devout virgin.

Though there is pleasure in watching morally vacuous people manipulate one another, it is only when the young Mademoiselle finally speaks—for, while  the titular character and object of desire, she remains silent until the last quarter—that the film becomes interesting. Her objections to the ongoing  deception, the only protest and moral act in the film, in turn reveals more inequalities. Though the hypocrisy of the libertine who can sleep with as many women as he wants without any harm to his reputation isn’t particularly new territory, the power wielded by Madame de La Pommeraye can only come from societal inequalities, for her class insulates her in ways that the Joncquières could never be. All four characters have committed the crime of sleeping with others outside of the sanctity of marriage, but only two were deemed prostitutes for it. That the fact of the whore pretending to be the virgin reveals more about the surrounding society than the deception itself is fascinating, yet it happens too late—and the film is a bit too taken with itself to notice.