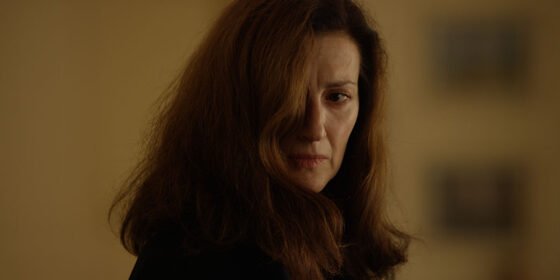 A tense, seemingly “realistic” family drama that, in its absurdist, uncanny accents, betrays an affinity to more fantastical storytelling and existentialist literature (particularly Franz Kafka and Robert Musil), Ana Urushadze’s Scary Mother centres on the pale, wan Manana (Nato Murvanidze), who is writing her first novel well into middle age. There is no inkling as to what she did before (besides housework), and her family is skeptical about her prospects as a writer, to say the least. The show of support that her husband, Anri (Dimitri Tatishvili), and her children muster evaporates once she reads aloud the first pages of her manuscript. Manana’s novel revolves around a scary, mythical creature, a hungry bat-woman prone to eroticized, vampiric dreams. Written in the first person, it includes an explicit sex scene in the context of an extramarital affair, as well as barely veiled references to Manana’s family, including the children (which are portrayed as weeds that Manana’s fictional avatar must pluck out) and Anri himself, who is described as a piece of “slippery meat” whose odour poisons her dreams.

This calamitous first family reading is further aggravated by the sudden arrival of Manana’s editor and literary agent Nukri (Ramaz Ioseliani). It’s not clear how Manana met him, or why she never mentioned him before, but his ardent advocacy for the novel quickly erupts into a quarrel with the outraged Anri. Nukri’s insistence that Manana’s genius is being thwarted by her husband’s intellectual dullness eventually drives a wedge between husband and wife, to the point that Manana moves out and sets herself up in the bizarrely red-lit back room of Nukri’s office, which is located directly across the street from the family’s apartment.

Mad, selfish, confused — the family’s judgments of Manana run the gamut, but all believe that her behaviour, and her desperate need for autonomy, is an act of betrayal. Manana, for her part, is incredulous, or at the very least cautious, about her agent’s enthusiasm for the manuscript, yet she remains resolute in her determination to finish it.

Whatever else might be driving her, she is clearly in the grip of the creative process, which seems to have even altered her sense of her physical surroundings. In one scene, she reveals to Anri that her writing began when he changed their bathroom tiles. Every tile, she claims, contained some crucial element of her story—a confession that leaves Anri all the more bewildered, since the tiles are uniformly plain, without patterns. Is Manana then delusional?

In time-honoured Freudian fashion, Manana’s relationship with her parents seems to hold some key to her actions. It was Manana’s mother who told her mythical stories, instead of fairy tales, in childhood—a hint that myths communicate painful, unvarnished truths, and so we invoke them at our own peril. When Manana first visits her parents’ home in the film, she looks up at the ceiling, from which hang a few loose cables—a reminder of a personal wound that is yet heal, which can be traced back to the diagnosis of her mother’s mental illness, and which begs the question of whether that illness is hereditary. Meanwhile, the film’s colour concept links the vibrant red of Manana’s father’s study to the oppressive red of her writing studio, suggesting that the source of her anguish fuels her creative drive.

With the help of such visual links, Urushadze eases us into Manana’s psyche, introducing subtle gradations in the film’s generally monochromatic set design and making the most out of a small radius of claustrophobically brutalist architecture. The delicate play of light achieved by Mindia Esadze’s cinematography also contains its share of clues, which point beyond Manana’s own mental state. In the early passages of the film, Manana is repeatedly seen sneaking between rooms in the family apartment, her figure a dark cutout glimpsed through translucent glass. Later, in a scene where Anri and the couple’s daughter Dea (Anastasia Chanturaia) confer about Manana, Anri himself is framed, in profile, behind a glass screen—an echo of that earlier visual motif, and one that indicates that Urushadze is framing her story less as a case study than as a strange dance between these two figures of husband and wife.

The situational ambiguity of Urushadze’s script is a perfect complement to the psychological ambiguity of her protagonist. As uncertain as we are about Manana’s mental health or what her true desires actually are, we are eventually equally mystified by Anri, who can act protective and caring one moment, patronizing and despotic the next. In one scene, Manana and Anri exchange tense words, only to suddenly burst into laughter. “It’s not funny,” he scorns her, as they both go on laughing. Yet this cheer has a maniacal edge to it, hinting at the deep, unresolved tensions that lie beneath the veneer of a harmonious relationship. Equally ambivalent is the scene where Dea, by flashing the lights in the family apartment, seems to signal to Nukri across the street that the family approves of the novel’s publication, inspiring him to share it with the publishing world. Even with this one, seemingly clear action, we cannot be certain of the motivations or contexts surrounding it — was it in fact a coincidence, and did Nukri mistake an utterly random action for a green light?

A film about a housewife whose attempts at self-definition are thwarted has all the makings of a torturous melodrama, but Urushadze doesn’t develop her story along this single line. Indeed, in addition to the intricate series of little mysteries it gradually introduces into its narrative, Scary Mother proves delightfully off-kilter, the dead seriousness of the social setting and the family conflict pierced by humorous or absurdist moments. Manana’s relationship to Nukri, for example, isn’t devoid of sensualist kinks, suggesting that the intellect, even if dangerously prone to delusion, is a powerful aphrodisiac. As well, Manana’s father, inspiration and also symbolic nemesis, is not simply a monstrous Freudian patriarch, and indeed provides one of the film’s most ironic scenes when he first flatters Manana for the brutal, piercing honesty and courage of her writing, and then tries to convince her to write himself out of the novel.

Despite these and other obstacles presented by her family, in her own, gentle fashion, Manana makes it clear that the final balance of power must rest with her. For all the film’s morbidity, there is more than a hint that Manana is developing a real taste for life through her writing. When she finally finds her ending, after responding to sounds only she seems to hear (which, on the soundtrack, resemble dropping pins), she gobbles up a cake with gusto. It may be this final image, of a simple pleasure Manana enjoys on her own, that signals her liberation from all nagging, dissenting voices. 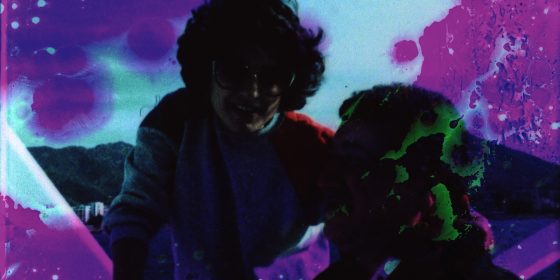 A mother’s story also lies at the center of Rolla Tahir’s short Sira (2017), in which, at her daughter’s request, a woman recounts her emigration from Kuwait after the Iraqi attack, and her subsequent journey to Egypt. This memoir, culled from found footage and home videos, unfolds via a few abrupt transitions. From one scene to the next, the large family gatherings give way to images of war. But even in the midst of destruction, some footage, such as that of a couple lovingly holding hands on a boat, harks back to more peaceful times.

Tahir creates numerous dissonances that underlie the family story, e.g., a tranquil scene of a couple (possibly the mother and father themselves) playing a board game while the mother’s voice relates the beginning of the invasion. Via this simple contrast, Tahir allows us to absorb the personal emotional cost of migration, as well as see the image of what is being lost.

Sira’s final dislocation is captured by the mother’s succinct phrase, “And now you’re all estranged again”—a reference to her children’s emigration to Canada. The final shot, of a person wading through snow as flakes continue to fall, leaves one with a sense of anticipation. The last impression—a cut-off figure receding into the distance—is as if the mother’s voice was beginning to fade.