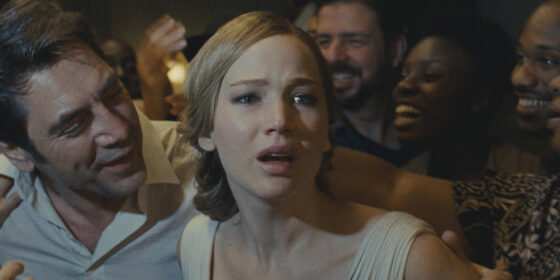 Possibly the most anticipated title on the 2017 fall festival circuit, Mother! certainly is the visually delirious tale promised by its marketing team (the exclamation point is earned!), but Darren Aronofsky’s awareness of his own directorial grandeur ultimately turns it into a self-referential, hallucinatory trip.

A world-famous poet (Javier Bardem) has sought refuge with his much younger wife (Jennifer Lawrence) in a secluded Victorian house, hoping the countryside quiet will help him overcome his writer’s block. The unexpected visit of a married couple (Ed Harris and a scene-stealing Michelle Pfeiffer) and their two violent sons (Domhnall and Brian Gleeson) shakes the central relationship: having long toyed with the idea of having a baby, Bardem finally gets Lawrence pregnant, and finds inspiration again. The child’s birth coincides with the publication of the poet’s new masterpiece, but as thousands of his admirers flock to the house to pay tribute to his genius, the invasion spirals into an ultra-violent tour de force that threatens Lawrence’s home, life, and child.

Hate him or love him, Aronofsky’s works are rarely best appreciated on a single viewing, and Mother! is no different. Lawrence’s drama is rooted in a multi-layered Biblical subtext, and it is not hard to see the house in Trier-ish terms as an allegory of the Garden of Eden from where God (Bardem) expels Adam and Eve (Harris and Pfeiffer) and then watches humanity slowly shatter His creation. By the time the self-destructive plot trajectory reaches full speed, the film becomes a nail-biting, Inferno-like descent , with Lawrence delivering a harrowing performance as she turns into a primal force of nature and connects with the house’s secret underworld.

So: Mother! is the visually entrancing, out-of-this-world project everyone expected, yet still falls well short of its ambitions (an Aronofskyian theme if there ever was one).  The film works more through images  than words, and a handful of  mesmerizing shots (the cinematographer is Matthew Libatique, working in 16 mm) cannot  fully rescue a patchy script littered with clumsy dialogue. Nor can these visual flourishes completely dissipate the fact that Aronofsky may be more interested in showcasing his stylistic mastery than in actually doing justice to and thoroughly exploring his characters’ complexities. Ironically, by the end of Mother!’s 108 minutes, Javier Bardem’s egotistical  and self-absorbed poet, pounding away arrogantly at his would-be masterpiece,  doesn’t look all that different from his creator.