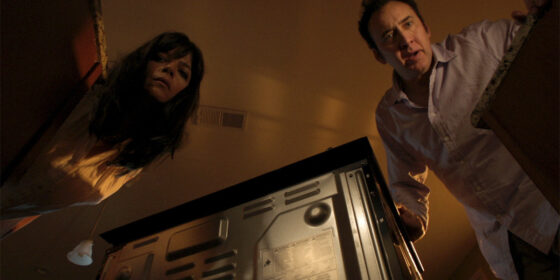 For his first solo directorial effort, Brian Taylor (of Neveldine/Taylor, the creative duo behind Crank and Ghost Rider: Spirit of Vengeance) tackles the challenge of comedy-horror head on with a premise that could have gone so wrong: a mass hysteria causes parents to suddenly turn against their children, with the clear intention of murdering them. But what could have been a cynical, sadistic and cold deconstruction of the family unit—The Belko Experiment set in the home rather than at the office—is much more good-natured and straightforwardly enjoyable than this synopsis may suggest.

Mom and Dad has no interest in truly terrifying the viewer, or offering plausible explanations, and does not focus on the horrible gore this scenario entails either. Rather, it is a completely self-aware comedy that is ultimately more interested in the hilarious contrast between the parents’ mundane frustrations and their extreme, violent responses. Our point of reference in the film is Carly (Anne Winters), the perfectly normal teenager trying to survive and protect her little brother Josh (Zackary Arthur), but the film also aligns us to an extent with the adults. Suffering the realistic difficulties of a woman going through a midlife crisis, the mother (Selma Blair) is the more sincere of the two, while the father (Nicolas Cage) is a totally absurd creation with the most basic needs, who laments the fact that he can’t spend his entire time going on car rides with girls anymore. “I was 100% sex!” is but one of many unforgettable lines blessed by Cage’s unique delivery, in a film that makes complete use of his unique set of skills.