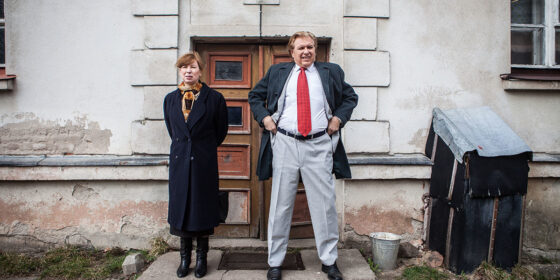 The TIFF catalogue description trumpets Miracle as “the first film from Lithuania to play the Festival in over 15 years” (sucks to be Sharunas Bartas). While indeed no miracle, this debut film by Egle Vertelyte is certainly pleasant enough, occupying a familiar film-festival category—that’s to say that, if you haven’t marked “wry-yet-rueful Eastern European deadpan comedy” off your bingo card, Miracle fits the bill. It’s the story of a failing communal pig farm managed by Irena (Egle Mikulionyte), a locally unpopular boss lady. Things kick into mid-gear upon the arrival of brash, swaggering Lithuanian-American businessman Bernardas (Vyto Ruginis), who shows an inexplicable interest in non-metaphorically buying the farm.

With his flash and cash and classic Cadillac, Bernardas is a hit with the locals, even while Irena remains rightly skeptical. (Hint: the dude is not interested in matters of the porcine variety.) And yes, Bernardas does bear a passing resemblance to a certain 45th president of the United States, but there’s really nothing to make of it—this guy is a harmless huckster. Putin doesn’t poison Irena’s lay-about husband with polonium, and he never once grabs the farm’s prizewinning sow by the pussy. In fact, Bernardas actually manages to perform the “miracle” of the title, so he’s not entirely worthless. Irena’s fate, meanwhile, is bittersweet, in keeping with the Eastern Bloc cinematic template.