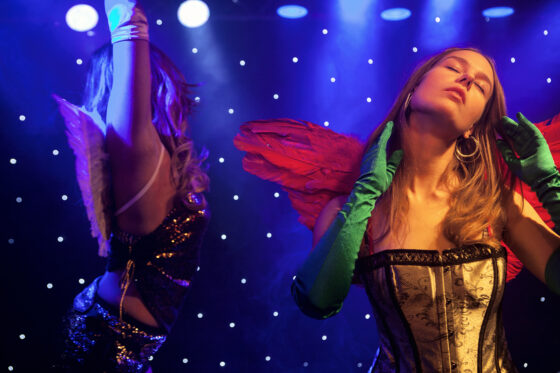 With the demise of TIFF’s Vanguard program—the one with the ostensible mission of bridging the gap between art- and  grindhouses—it’s worth wondering what exactly makes a satisfying mix of the two, and if it’s even really worth pursuing in most cases. Looking at a film that would’ve likely been at home in that section and otherwise gets shunted off to the sprawling desert known as Contemporary World Cinema, the answer seems a bit clearer. Utterly ludicrous yet without the formal chops or at least gleeful bad taste to indulge in its pulpy plot, Miami is the case of a European festival film that actually begs for a big-budget remake—hopefully by Paul Verhoeven, though it’ll more likely be a slumming-it Atom Egoyan.

By fate, Anna (Sonja Kuittinen) is reunited with her estranged sister Angela (Krista Kosonen), an exotic dancer who manages to get her in on the profession—which is soon revealed as involving not only dancing, but the blackmail of affluent customers, all to collect enough money to reach the dream destination of sunny Miami. To invoke Verhoeven again, Miami’s “surviving in a world populated by assholes” (thank you Jacques Rivette) undercurrent seems spot on, but the director comes off as ultimately too shy for her own subject matter. It is perhaps admirable on some level that Miami deliberately opts out of nudity or any titillation of any kind, but choosing to be a prosaic crime flick, replete with dull-as-dishwater naturalism and handheld camerawork, over the full-blown erotic thriller hinted at by the logline is nothing but a missed opportunity.