The Mercy of the Jungle (Joël Karekezi, Belgium, France) — Discovery 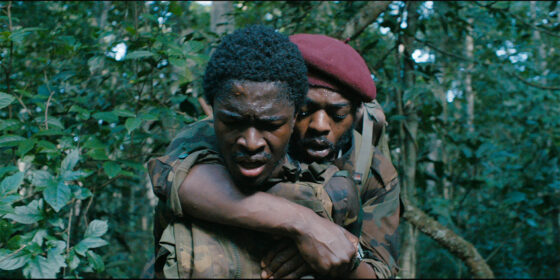 Joël Karekezi’s second feature, The Mercy of the Jungle, is a propulsive film that uses the visual and dramatic potential of hermetic environments to create a story that is both broad in scope and direct in vision. Taking place at the outset of the Second Congo War in 1998, the Mercy of the Jungle makes great use of space, with Karekezi animating the surroundings of his characters via lush sound and dense visuals, resulting in an almost total sensorial immersion. Rather than a distanced narrative eye, the director’s balance of interiority and interconnected flows of external, political conflict is refreshing in its commitment to a world-based subjectivity.

Karkezi makes work of the networks at play in the film with great ease, drawing conclusions, some slightly on the nose, with regards to the enmeshment of resources, territory, and conflict between The Democratic Republic of Congo and Rwanda. His focus on the emotional and social effects of war is clear and, at times, imbued with welcome hints of humour that deepen the tone beyond mere bleakness. The director is at his best when he frames his leads within a jungle that betrays both a physical and emotional vulnerability within them, and at his most thoughtful when he considers the humanism that lies just beneath the otherwise separatist nature of territorial conflict. For better or for worse, The Mercy of the Jungle is a film that aspires to evoke an all-encompassing vision of humanity.