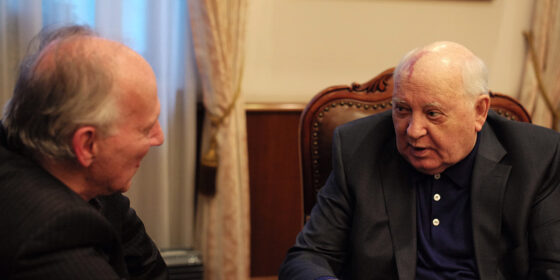 While Errol Morris is busy sitting down with unrepentant fascists, Werner Herzog is making time with one of the key figures of the 20th century, a leader so visionary that he essentially reformed himself right out of a job. This is not to say that Meeting Gorbachev is a free meeting of the minds: made with the full cooperation of the Gorbachev Foundation, the film is a job for hire, and frequently veers toward the hagiographic. The project is self-serving for both of its key participants.

Having said that, there is no question that the Gorbachev legacy is due for re-evaluation, particularly in light of the rise of Putin and his oligarchs. Although Meeting Gorbachev tends to shy away from direct criticism of the current Russian leader, one does not need to read between the lines too hard to see that for Gorbachev, the last president of the USSR and possibly the last hope for “socialism with a human face,” the present global situation represents a betrayal of his own hopes for a more dignified future for the Soviet people.

Interestingly, Reagan and Bush 41 come off as Gorbachev’s partners and worthy adversaries in this quest. Despite the collapse of the Soviet Union and the entire Communist bloc—something Gorbachev looks back on with mixed feelings, to be sure—he considers his greatest historical triumph to be widespread nuclear disarmament, something he and the Reagan Administration accomplished in tandem, often to the consternation of Margaret Thatcher and Helmut Kohl.

Viewers who do not remember this period of the Cold War, and for whom glasnost and perestroika are unfamiliar terms, could do much worse than to turn to Herzog’s primer and learn from the man at the centre of this pivotal moment in world history. Meeting Gorbachev falters as a film when Herzog overplays his hand, casting the former leader as a tragic hero, giving in to his most mawkish narrative tendencies. Not that Herzog is entirely wrong: going from being the leader of a global superpower to making a cameo in a Wim Wenders film is quite a comedown. (Meeting Gorbachev refrains from mentioning Faraway, So Close!, which I’m sure was a stipulation of the interview taking place.) Still, Herzog is quite correct in his characterization when he cites the Greek concept of kairos: the right man for the right moment. In a world filled with slimy opportunists and demagogues, let us pour one out for Mikhail Sergeyevich Gorbachev, benighted champion of democracy, patron saint of transitional figures.