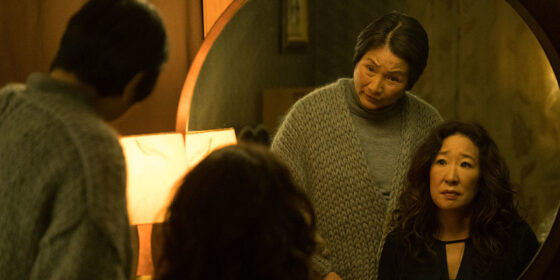 Mina Shum’s first narrative feature since 2002 (following a decade-long stint directing Vancouver-based television) is contained within the few blocks surrounding the intersection of Renfrew and Hastings in East Vancouver, a community largely made up of longtime Asian immigrants. One of these residents is the silently resilient Maria (Pei-Pei Cheng), who has lived in Canada for decades and has no work experience, no close friends, and no money to her name (it’s all in her authoritarian husband’s).

Shum positions Maria’s emancipation from her unfaithful spouse in a world that’s largely detached from the rest of the city: to leave her traditionally conservative home is to find her place within a broader community.

As long as Vancouver continues to masquerade as New York, Seattle, or other American cities that have 20-storey glass boxes as their go-to architectural mode, any work that takes into account the region’s diasporas will feel mildly subversive, even if it’s hollow in the context of the work as a whole (for a more deliberate example of a Vancouver filmmaker engaging in geographical deconstruction, see Wayne Wapeemukwa’s Luk’Luk’l, also at TIFF). But that’s about as far as Meditation Park‘s daring extends. Shum has designed her film for general viewers, which means that coherence of tone and theme are less important than forcing in broad comedy and uplifting emotion. It continues to be a sad fact that even when our local cinema transcends conventional stories and corrects traditional representations, it often does so using forms that are awkwardly pasted on top of the work, rather than welling up naturally from the richness of its subjects.