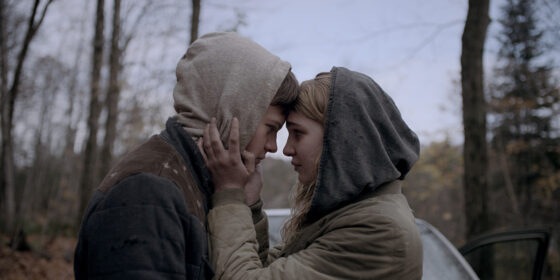 Early in Nathan Morlando’s Mean Dreams—a Canadian production with American aspirations—kewpie-doll runaway Casey (Sophie Nélisse) gets moony-eyed as she remembers her dead mother’s wish to get away from the dour country that entrapped her and light out for the ocean. It might be a testament to the film’s restrained Northern ethos (in spite of the American license plates that make the exact location tough to pin down) that when Casey and co-conspirator Jonas (Josh Wiggins) head for Highway 17, blazing their own trail out of the pig pens and unploughed fields of the nowheresville farm that’s holding them down, they settle not for the ocean but for the Great Lakes. That’s as good a substitute as they’re likely to get on the run from Casey’s father (Bill Paxton), a lawless lawman with, what else, a shady past. Good enough might as well be Morlando’s goal, too, in directing a film that freely cribs its aesthetic, thematic, and narrative beats from Badlands (1973) and No Country for Old Men (2007) while remaining content to be their mass-market YA alternative.

Familiarity doesn’t always yield tedium, but it’s hard to muster much enthusiasm for Mean Dreams’ sleepy regionalist remix of genre tropes and images. Morlando at least proves a competent craftsman, sustaining some low-key tension in the dimly-lit-dawn set piece that kicks off Jonas and Casey’s life on the run. (This sequence, too, is admittedly straight out of the American heartland crime playbook, most resembling the backseat-glimpsed murder from Road to Perdition [2002].) The script doesn’t do the cast many favours—see poor Broadway- and Stratford-proven Colm Feore waxing on how sharing “spits and secrets” don’t make the outlaws blood—but Wiggins also builds on the potential he showed in Hellion (2014) as Casey’s shy protector, his unaffected toothy grin suggesting a baby-faced, pre-Will Hunting Matt Damon. There’s not a lot to see here, otherwise, besides the under-filmed wilds of northern Ontario, whatever the filmmaker wants to call them. If nothing else, call this the best teens-on-the-lam thriller to ever shoot at the service station in Desbarats, Ontario.