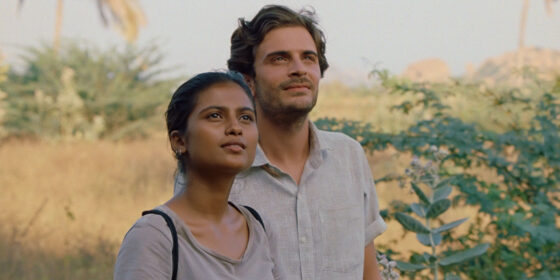 In bald description, Mia Hansen-Løve’s follow-up to L’Avenir (2016) might seem a rather distasteful (or at least misguided) affair: Gabriel (Roman Kolinka), a French war correspondent recently released from Syrian captivity, returns to his childhood home in India, where he falls in love with the title character (Aarshi Banerjee), his godfather’s young daughter. But as in L’Avenir, the expected story arc—here, of a post-traumatic journey of self-discovery that segues into a cross-cultural romance in a colonialist context—is continually, actively overturned: Gabriel’s initial return to Paris doesn’t precipitate a reconnection with his former partner; the death of a colleague left in captivity causes no significant change in his life (and even his brief moment of mourning is interrupted by a local emergency); his journey across India (compressed into a scant few minutes of screen time), as well as an attempt to reconnect with his estranged mother, both fail to trigger any sort of epiphany; and when his childhood home—an explicit, physical connection to his past in Goa—burns down, the impact of its absence is immediately absorbed into a month-long ellipsis.

Even when the expected romance does blossom late in the film, various narrative details (Maya’s wealthy family background, her own studies abroad) minimize the potential power games and cultural imbalance that the basic set-up might suggest, and thus place Maya not alongside, but in opposition to something like Jacques Doillon’s Raja (2003), a film that takes the colonialist dynamic of its central relationship as its active focus. In fact, there’s not much of an attempt to develop the affair between Gabriel and Maya—and thus little effort at evoking the passion of their relationship—which seems equally due to the way Hansen-Løve frequently subordinates their dynamic to landscape and history as it does to Banerjee’s rather stiff, distractingly unaffected performance. (Granted, the latter could also be a product of directorial intention, but if it is it’s a misguided choice.) So when Gabriel’s return to his journalistic career cuts their relationship short (in a closing scene set to the strains of “Distant Sky”), what registers is not the rather maudlin sentiment of thwarted love, but the lingering impression that, for Gabriel, not much has changed from where he started out. And for a man who, both in action and by his own admission, only “goes where he feels useful,” such an ending is its own kind of tragedy.