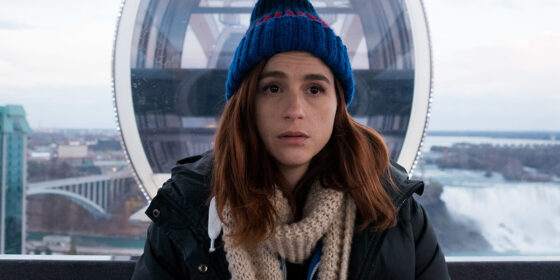 “Are you a piece of shit?” This is the question being pondered by 29-year-old Mary (Aya Cash), who suspects that she might be and knows for a fact that she’s a hypocrite, peddling substance abuse-program platitudes at her day job while getting fucked up by night (and in the afternoon, and on break, and so on). When her tenuous balancing act finally collapses (spectacularly as it turns out, with a wrecked baby shower and a smashed car), she’s forced to relocate from Toronto to her hometown of Niagara Falls, where her estranged father (John Ralston), wary stepsister (Sarah Waisglass), and spectres of past failures await.

Canadian cinema needs another return-of-the-prodigal story not at all, but Mary Goes Round justifies its existence and excels through the good, old-fashioned virtues of writing, directing and acting — the latter of which is all very good, especially that of Cash, who’s got the surface sarcasm and internalized shame of the self-loathing day-drinker down pat and holds the camera like a star. Kudos to debuting writer-director Molly McGlynn for writing her lead a role that doesn’t let her down, and leavening the material’s melodramatic potential with exactly the right kind of humour: terse, not cute, and never so much that the essential seriousness of a story that explores the multifarious relationships between parentage, embarrassment, and sacrifice is undermined.

McGlynn also gets credit for a spot-on soundtrack cue of Bran Van 3000’s “Drinking in L.A.,” used here not as a signifier of ironic, I-love-the-’90s distance, but with an ear for the song’s drifting, post-adolescent melancholy. “You’re still just a kid,” another character tells Mary late in the film, generously offering an alternative to the idea that she’s a piece of shit, and voicing the basic wisdom and decency of a smart, humane film which understands that the innocence of childhood and the culpability of adulthood are both relative conditions.