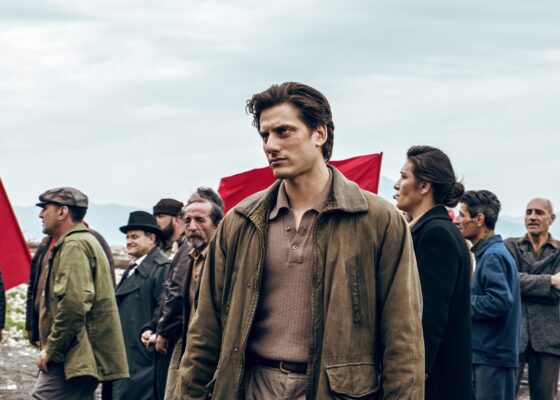 Pietro Marcello’s decade-long evolution from idiosyncratic film essayist to grand narrative storyteller represents one of the most significant artistic flowerings in contemporary cinema. Recently unveiled in competition at Venice, the Italian filmmaker’s fifth feature, Martin Eden, is momentous in ways that many Marcello enthusiasts may not expect: distinctly big, dramatic, and affecting, it confirms Marcello’s burgeoning talents and marks the belated arrival of a singular artist to the international art-house stage. More impressively, it does so without sacrificing the beauty, rigour, and intelligence that has built Marcello’s reputation as one of European cinema’s foremost fusionists. Indeed, one can draw a mostly straight line from the director’s early archival shorts and increasingly expansive hybrid features to the majestic storytelling sweep of this, his most ambitious project to date.

Based on Jack London’s 1909 novel, Martin Eden finds Marcello applying his wide range of art-historical reference points and flair for archival materials to a story of vast sociopolitical resonance. Whereas the director’s two previous features, The Mouth of the Wolf (2009) and Lost and Beautiful (2015), were rooted in documentary—and, indeed, only took on their respective narrative dimensions during the course of production, via a fortuitous encounter with the wayward protagonist of the former and the unexpected death of the latter’s original subject—Martin Eden operates from a wholly fictional foundation, albeit one reimagined to correspond with Marcello’s long-standing interest in the plight of Italy’s proletariat. To accomplish this, Marcello and his Lost and Beautiful co-writer Maurizio Braucci—who is also a former collaborator of Abel Ferrara (Pasolini, 2014) and Matteo Garrone (Gomorrah, 2008), as well as the recipient (along with Claudio Giavanessi and Roberto Saviano) of a Silver Bear for Best Screenplay at Berlin this year for Giavanessi’s Piranhas—have transposed London’s novel from early 20th-century Oakland to Naples in an unspecified moment in the decades surrounding WWI. In doing so, they’ve shifted the socioeconomic elements of the original story into a continuum of Italian modernism in which politics and aesthetics go hand in hand. Further, in freely adapting London’s novel, Marcello and Braucci have fashioned the title character into an emblem of the modern culture industry, whose neoliberal particulars London predicted with startling clarity.

The film follows Martin (played with an extraordinary combination of tenderness and ferocity by Luca Marinelli) from his early days as a lowly, uneducated sailor, through his years as a wide-eyed writer under the spell of bourgeois society, to his later life as a celebrated but bitter artist living in posh isolation. As in the novel, Martin’s journey begins serendipitously. After a passionate night with a working-class woman named Margherita (Denise Sardisco), he saves the son of a local aristocrat from a beating at the hands of a dockworker. Arriving at the family’s gilded estate, he’s introduced to the boy’s sister, Elena (Jessica Cressy), a university student who begins to tutor Martin and encourage his nascent writing talent. As the two develop feelings for one another, Martin, sensing an opportunity to raise his social and artistic standing, integrates himself into Elena’s world of privilege and refinement, both to win the approval of her family and to earn respect as an aspiring author. Although Martin’s upwardly mobile ethos stands in contrast to London’s socialist ideology, the book is nonetheless a definitive piece of auto-portraiture, coming as it did after nearly a decade of acclaim in which the author, still only 33 at the time, had grown increasingly disillusioned with the trappings of fame and its attendant pressures.

It’s in this tension between Martin’s individualism, shaped through the evolutionary thought experiments of English political theorist Herbert Spencer, and the era’s wider socialist values that Marcello’s film generates its power. Encouraged by his troubled mentor Russ Brissenden (Carlo Cecchi) to add a socialist element to his writing (“It might be the only thing that will save you from the disappointment that’s approaching,” he says prophetically), Martin instead takes the opposite tack: in one of the film’s most memorable sequences, he and Brissenden attend a labour protest, and Martin takes the stage to denounce collectivism, calling the protestors a “society of slaves.” This sentiment is echoed just a few scenes later, when Martin calls out the hypocritical politics of Elena’s father and a group of his well-bred liberal colleagues over dinner. Just as Martin begins to make inroads as a writer (the story’s first half is punctuated with multiple returned manuscripts that eventually result in the publication of his debut novel, The Apostate), so too does his disenchantment with his new surroundings begin to take a toll on his sense of self. When his relationship with Elena inevitably falters and Brissenden commits suicide, Martin, having since rekindled his romance with Margherita, is left to reconcile his beliefs with the belated recognition of his work by the very people that prompted his exile.

Such class-conscious concerns are part and parcel of Marcello’s cinema—one might recall the migrant workers travelling through Italy by express train in Crossing the Line (2007), or the unrequited romance between the two ex-cons at the centre of The Mouth of the Wolf—and if one of Martin Eden’s great accomplishments is in how these preoccupations have been translated into a more concrete narrative structure, it’s equally impressive how Marcello has integrated his typical use of archival material and expired celluloid stocks into the film’s larger formal organization. Interspersed throughout Martin’s journey is found footage of early-to-mid-century street life and labour, images of ships, trains, and machinery reflecting an era of rapid industrialization. Together with original 16mm footage shot by cinematographers Alessandro Abate and Francesco Di Giacomo and treated (through colour-tinting and other analog effects) by Marcello for sequences that evoke memories of Martin’s childhood, the film creates a deceptively slippery temporal framework that speaks to the director’s broad view of history and his protagonist’s place in our collective view of the past. “No society that ignores the law of evolution can last,” Martin declares during his speech to the group of incensed strikers; of course, the same might be said of artists and filmmakers, and with the unexpected scope and audacity of his latest Marcello proves that he has no intention of resting on his laurels.