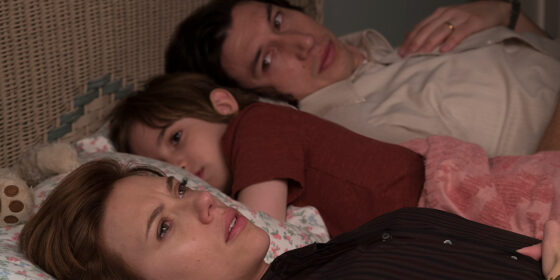 Marriage Story opens with a close up of Nicole (Scarlett Johansson) with her neck wrapped in a black turtleneck and her blond hair cut short. She is on a stage, being directed by Charlie (Adam Driver), her close collaborator, as well as her husband. Like the overlap between the protagonists’ professional and private lives, the hint at Bergman’s Persona is one of the predictable items that Charlie shares with the auteur archetype. His outfits, the bookish apartment, New York-hates-L.A.—Woody Allen looms. Baumbach codifies these attributes as a sort of independent genre unto itself, conceding little to the parodic, potentially comic aspect of such operations.

Falling between the canonical Kramer vs. Kramer (1979) and Joachim Lafosse’s underseen After Love (2016), with humorous bits by way of Allan King’s A Married Couple (1969), Marriage Story scrutinizes both perspectives involved in the legal and emotional distress caused by separation and the shared custody of a child. Being a couple is a matter of storytelling unto itself, and Baumbach effortlessly deploys this conceit along tragicomic lines. Yet, in returning to his formative topic with the aspiration of depicting both parts equally, he draws a story of imperfect equality.

When Nicole moves from New York to her native California to star in a pilot, Charlie is numb to her reasons. On the same day he receives a MacArthur Fellowship, she serves him with divorce papers. This coincidence is quite satisfying, if you side with Nicole—which may happen, given that her character does not conform to established stereotypes like Charlie’s. That’s the slight disparity: that her part is completely new in its articulations and can’t count on recognizable precedents.

But ultimately, the film isn’t really about revenge: what it offers—very amusingly—is a heartfelt depiction of the divorce business. Who wouldn’t hire lawyers like a ruthless Laura Dern or a raging, pink-skinned Ray Liotta? The legal professionals mirror their clients: both are right and wrong, obnoxious and sympathetic at once. When Nicole is asked to recount her version of the separation, Johansson morphs into a Frances McDormand-like act: a life shared with a self-absorbed and artistically accomplished person can be insufferable, until there is the chance to voice a personal narrative. In another sequence, Driver exemplifies what Almodóvar suggests in Pain and Glory: a great actor is not the one who cries, but the one who struggles to hold in his tears. Marriage Story doesn’t want you to take sides—if you do, it may be that you’ve chosen the performer, or their performance of their part.