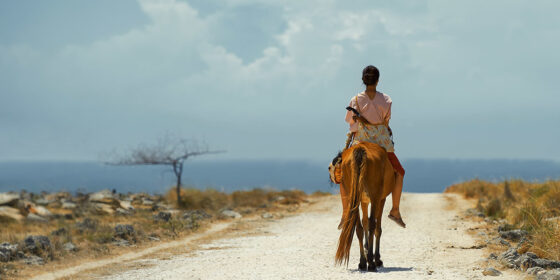 Marlina the Murderer in Four Acts is a post-postmodern grab bag of genre moves and hollow gestures. At times it seems to want to be taken seriously, and at others it is content to revel in pastiche, very much like Ana Lily Amirpour’s films. How exactly are we supposed to take this movie? The title, for starters, seems like it would be ironic. Yet Marlina (Marsha Timothy) does indeed kill several men, including local bad guy Marcus (Egy Fedly)—but this is only after he informs her that he and a group of his henchmen are going to rape her, one after another, and then make off with her livestock.

The fact that Marlina is a widow means she has no one to defend her from this fate—her husband’s dead body is propped up in the corner, one of the film’s unexplained surreal touches—so she has to take matters into her own hands. But as director Mouly Surya shows it, Indonesian custom is so inherently biased against women that Marlina still can’t count on a claim of self-defense. And more to the point, Surya presents this lack of equal treatment matter-of-factly, not appearing to take a clear stand on Marlina’s predicament.

Surya seems to have the makings for a kind of feminist Western here, with Marlina fleeing across the sun-baked landscape, on horseback at one point. She is, like so many classic gunslingers, a killer by circumstance, a desperado with an honourable cause. But again, it’s next to impossible to suss out where Surya is coming from or what she really cares about—which, sadly, seems to describe more and more festival films these days. All the expected parts are there, but in the end they don’t really add up.