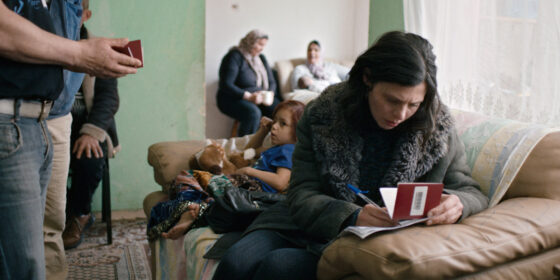 Even without all the many handheld tracking shots that trail the eponymous heroine of Marija through the streets of Dortmund, the parallels to the work of the Dardennes would still be impossible to ignore: a post-industrial setting that’s seen better days; a protagonist in such desperate economic straits that nothing is taboo; and all the ill-advised decisions and moral quandaries that such a situation apparently brings with it. Yet while Swiss director Michael Koch is certainly capable of recognizing the elements of a pre-existing template, it doesn’t mean he knows how to combine them to meaningful effect, even if creating a functioning facsimile were a worthwhile enterprise in the first place.

Marija (Margarita Breitkreiz) is an unfeasibly pretty, well-educated Ukrainian immigrant with an almost perfect command of German who is nonetheless working as a chambermaid for 4 euros an hour to fund her dream of opening a hairdressing salon. After getting sacked for stealing money on the job, she’s forced to make ends meet by granting favours to both her dodgy landlord and an even dodgier real-estate baron, making predictable compromise after predictable compromise while still always keeping an eye on the prize.

Although the drab locations and politely agitated camerawork are presumably intended to confer verisimilitude and immediacy onto the hackneyed plot, any sense of being immersed in real life is quickly dispelled by the artificiality of the dialogue and its often overemphatic delivery, with snarled clichés such as “If you don’t screw them, they’ll screw you” or “Why don’t you look for a normal job?” smacking far more of script than street. Perhaps this lack of subtlety wouldn’t grate as much if the plot were more propulsive, but the basic quest narrative is repeatedly sapped of clarity and urgency due to the intrusion of too many subplots and secondary characters. As is the case with most inferior copies, the dominant feeling conjured up by Marijia is a yearning for the original: even after the Dardennes’ shtick petrified into formula, it never felt as schematic as here.