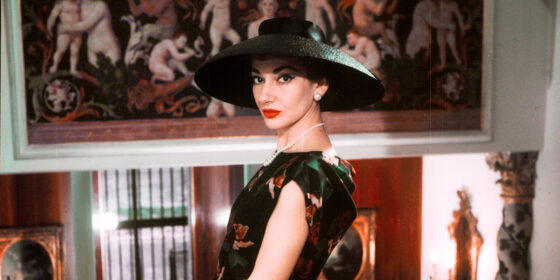 Compiled from archival footage of Maria Callas’ stage performances, interviews with the press, Super 8 home movies and the occasional letter, Maria by Callas attempts to create a portrait of a woman using as many angles as possible. Tom Volf’s film is more interested in Callas’ personal life than the professional career of one of the greatest opera singers of the last century. We see her tell her attentive audiences her version of her life story: the “severed relationship” with the Metropolitan Opera, her reputation as a diva, and her long “friendship” with Aristotle Onassis. To increase the sense of authenticity, Volf includes candid material of Callas backstage or on the set of Medea with Pier Paolo Pasolini, private moments of preparation, and correspondence with friends. The interview footage Volf selects depicts Callas as a woman who’d be happiest at home, and suggests that her life in opera was a destiny where “There is no way out.” Every news clip is treated as gospel truth.

Maria by Callas is, of course, founded on a fallacy: as its subject died prematurely at age 53, there is no possibility of a real, self-authored Callas biography. Instead we have a series of performances, whether on stage or with the press, which purports to reveal some heretofore concealed truth even as it attempts to make us forget Volf’s role in selecting and arranging the footage. What is really missed here is the opportunity to look at Callas’ authorship in her work, both on stage and off—to give her labour the credit it’s due, rather than simply defer to her statements that she’d rather be home with a child and a husband (as if Maria Callas could became Maria Callas without the work and skill she was known for). Primarily for the already devoted, Maria by Callas remains a testament to a woman who would always be more than her performances.