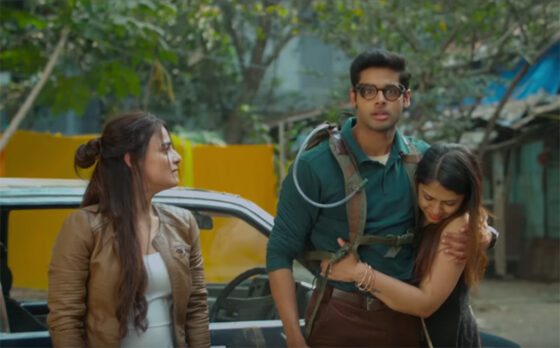 It’s a clever enough premise for an action-comedy. Surya (Abhimanyu Dassani) is born with a rare condition that doesn’t allow him to experience pain. And though this makes his childhood something of a minefield, short-circuiting the usual learning curve by which the rest of us humans learn to survive, it eventually leads him to train to be an action-film nurtured martial arts vigilante. (His once-radical grandfather helps him hone his gifts in secret, as well as coaching him on proper pain reflexes.)

There’s an ass-kicking love interest by the name of Supri (Radhika Madan) who must break the bonds of patriarchy in order to unleash her inner superhero. There’s a one-legged sensei (Gulshan Devaiah) down on his luck who is redeemed through his association with Surya. The sensei has an evil twin (Devaiah) who runs a security firm, all the better to supply scores of bad guys for the heroes to dispatch in multi-directional fight sequences. And there are songs that stop the plot in its tracks.

It seems churlish (and even a bit culturally insensitive) to claim that an Indian film is baggy at two hours and 20 minutes, but fans of this genre (the festival description cites both Jackie Chan and Stephen Chow, not without reason) are likely to get a bit restless around the 90-minute mark. In the course of my own viewing, The Man Who Feels No Pain went from seeming like an unexpected top ten for the year to a bit of a chore. Nevertheless, as TIFF winds down, you may enjoy a film that allows you to zone out in the middle, especially at around one in the morning.