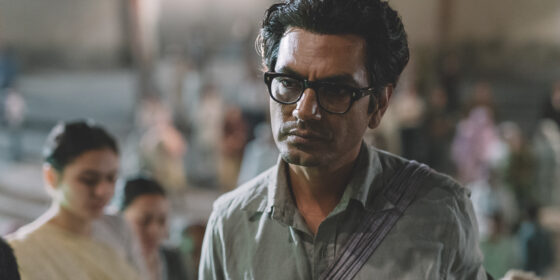 Following the career of author Saadat Hasan Manto (Thanda Gosht; Toba Tek Singh), Nandita Das’ sophomore feature plays like an artist-biopic checklist. Working in India and Pakistan during Independence and Partition, Manto (played, in a powerhouse performance, by Nawazuddin Siddiqui) grapples with social unrest, poverty, and anti-Muslim sentiment in his work, all the while displaying a knack for getting arrested for obscenity (six times!). Despite his passion and perseverance, Manto struggles with persecution and critical and commercial failure, descending deep into alcoholism and depression. And so Manto gives us yet another exceptionally talented, sensitive, and misunderstood writer who is equally impacted by political upheaval, personal demons, and the curse of being ahead of his time.

Where Das’ film does excel, however, is in its uncanny manner of capturing perspective and emotions. Deftly switching from real-life events to retellings of Manto’s short stories, Das enters her subject’s mind effortlessly. Through his eyes we see his creative process as he crafts his tales of marginalized communities within satires of Indian and Pakistani society. Point-of-view shots alternate between Manto’s characters without warning, allowing us to see how he purposefully imbues his narratives with different outlooks. Manto’s increasing alcoholism is nicely, impressionistically captured via foggy visuals and disorienting sound editing, and the atmosphere of political instability generates a constant, low-level anxiety. Overall, with Manto Das displays great skill and sensitivity as a director, which unfortunately is held back by her choice of a conventional narrative template.