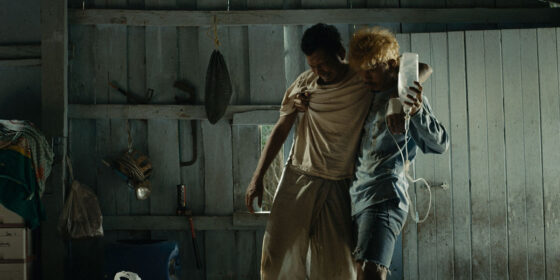 Manta Ray is a film about the Other and all that this philosophical, social, and ethical concept implies. The film strikes a graceful balance between the details of lived experience and a deeper symbolic scope, building the story quietly towards an encounter with the irreducible reality of Others and our responsibility for them. It does so perhaps most stunningly in a scene that embodies what philosopher Emmanuel Levinas calls the epiphany of the face: two men face each other in an empty room filled with flashing disco lights, swaying to the music, viewed in a close-up shot-reverse shot sequence that lovingly and playfully highlights the vulnerable, unknowable nature of a living presence. That it does so with two men whose relationship is undefined, both nameless and one mute, invites us to contemplate human relations on a more intimate yet abstract level than do most films.

This epiphany of the face is repeated, as the men face each other in a Ferris wheel, again artfully framed in space and movement (a conceit Aroonpheng used beautifully in his 2015 short film Ferris Wheel). The two are a fisherman (Wanlop Rungkamjad) and the man he discovers as a body in the woods, covered in mud and seemingly dead. But the unnamed fisherman brings him home and tenderly nurses him, naming him Thongchai (Aphisit Hama) when it becomes clear that he will never speak. The fisherman teaches Thongchai as if he were a child and the two become inseparable, sharing in the weird routines the fisherman practices: hunting for gems in a forest filled with dead bodies, speaking to manta rays in the ocean, breathing loudly underwater. But this peaceful coexistence is cut short when the fisherman disappears: a victim, no doubt, of his boss’s shady activities. Thongchai grieves, and when digging in the woods for gems, finds only death. But he receives another chance when the fisherman’s estranged wife Saijai (Rasmee Wayrana) returns. He gradually completes his transformation into the fisherman, but his brief joy ends when his friend startlingly returns. Thongchai is abruptly abandoned and returns to the woods and to death, drifting off in the ocean reborn as a manta ray.

Aroonpheng’s background as a cinematographer and painter is clearly in evidence in the film, which is a visual feast whose striking images are serene while in continuous motion—like water rippling in a canal. This approach is indicative of his filmmaking as well: carefully composed yet fluid. While the narrative arc of the film unfolds skillfully—and the actors are perfect—the film’s metaphors tell the real story. At the Venice premiere’s Q&A Aroonpheng explained that he added gems and lights in the forest only days before shooting started because he intuited that they were necessary to the film. Indeed, the conscience of the film isn’t declamatory, but resides in the way that strangers care for each other; it is also embedded in the gemstones concealed within the earth of the forest. These stones and the lights they refract in the darkness give presence to the unknown, unremembered bodies buried in the borderland between Thailand and Myanmar. The film also speaks through the voices of the Rohingya people it is dedicated to: a persecuted people in Myanmar seeking refuge in Thailand and other countries. Aroonpheng recorded numerous refugee voices and works them into a disembodied harmony in the sound design, creating a haunting symphony of absence. Aroonpheng’s style is certainly distinctive, but he shares the same gentleness as fellow Thai directors Apichatpong Weerasethakul and Jakrawal Nilthamrong: seeking their subjects through sorrow rather than anger.