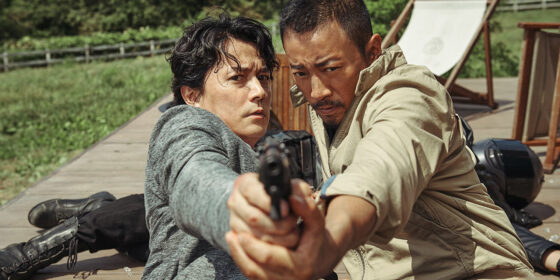 Brace yourselves: after the American sojourn that brought the likes of Face/Off and Mission Impossible 2 and a detour into Chinese historical-blockbuster mode with Red Cliff, John Woo has returned to the Asian police thrillers which earned him global fame with the hilarious, all-out-bonkers and thoroughly enjoyable Manhunt.

Zhang Hanyu stars as Du Qiu, a star lawyer who’s long defended a major Osaka-based pharmaceutical company, and is now ready to move to the States for a new job. But the pharma empire’s boss, fearing Du may reveal the truth behind some of the company’s dodgy experiments, has him framed for murder. After a night out, Du wakes up in his bed next to a dead woman. The police arrest him for murder, but the lawyer somehow manages to escape. With Du on the run, authorities send infallible detective Yamura to hunt him down.

What follows is a thrilling and entertaining chase that reads like a delirious farce and looks like the sort of wonderfully choreographed action film you’d expect from Woo. Based on Juko Nishimura’s novel You Must Cross the River of Wrath, Woo’s script is hard to take seriously, as the characters constantly exchange risible B-movie lines (some of them in English, which only adds to Manhunt‘s farcical aura). There’s a memorable scene in which Yamura has to defuse a bomb whose detonator is strapped around a kid’s belly; as he chooses which wire to cut, he asks the boy, “What do you want to be when you grow up?” Response: “A hero”—and lo, Yamura snips the right wire.

But if the screenplay is (knowingly) nutty, Manhunt’s chases are something to marvel at. Whether aboard speedboats through Osaka or inside a country house besieged by armed bikers, Woo’s action scenes jovially parody some of the director’s patented leitmotifs (e.g., the white doves Du and Yamura set free while battling). But while such touches will likely result in old-time fans welcoming Manhunt as a wonderful throwback to the director’s golden years, the film’s unapologetically goofy energy may also help introduce new audiences to the wonders of the Woo Cinematic Universe.