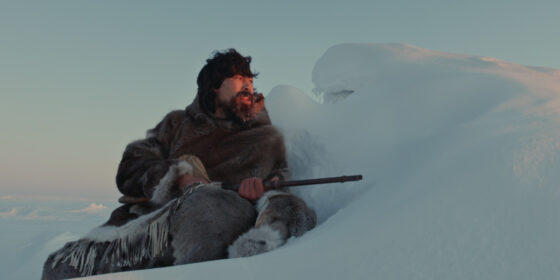 There’s something poetic in the notion of an indigenous reworking of John Ford’s The Searchers (1956), although it does not appear to be the motivating principle behind Zacharias Kunuk’s Maliglutit, which fashions itself as a western told in an Inuit way. There are of course a host of political/theoretical implications to such a doubling, most obviously the furthering of postcolonial discourse, but more immediately the bearing is geographic. Shot on location near Igloolik, Nunavut, the film is foremost faithful to place; there are no stand-ins, no surrogates, upon which the drama unfolds. The cast is entirely Inuit (the crew quite nearly, save for four members comprising camera, sound, and production), thus there is no misrepresentation of ethnic identity. Within this framework, Kunuk reconfigures a tale of vengeance that is conspicuous for its absence of an Other, the axis upon which Ford’s (ambiguous) moral tale is hinged.

“What kind of people can do this?” cries Kuanana, after returning from a hunt to discover his family brutally slain. The enemy is situated as interrelated rather than exotic—indeed, we see these rogue tribal hunters at film’s outset as they are cast from their camp for coveting wives and hoarding their hunted food—and what ensues is a search that, while less symbolically and psychologically proportioned than the Duke’s peregrination of Monument Valley, becomes a study in austerity—for both the characters traversing the denuded arctic tundra by dog and sled, and the behind-camera crew shooting in sub-zero conditions. It is in this aspect that the film transcends its stilted dramaturgy (how much of this owes to linguistic translation is better left to Inuktitut speakers; for a history piece set circa 1913, there is a wealth of profanity rendered into English). Kunuk does not evince a filmmaking grammar that undermines any dominant paradigms, but his methodology engenders a specific kind of production that is its own reward, one to be cherished even as the narrative becomes etched all too expectantly upon the white expanse of the snow desert, stained now with just enough red.