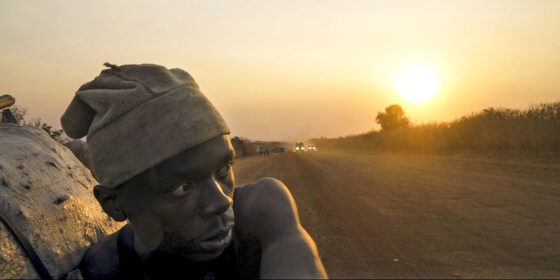 For all the recent criticism of Cannes’ reliance on the same big names, perhaps the bigger problem is the festival’s continuing failure to find new ones to replace them, as the chances of making a real discovery on the Croisette seem to dwindle further with each passing year. French director Emmanuel Gras’ Makala, winner of this year’s Critics Week, the sidebar theoretically dedicated to new talent, is a case in point: an entirely serviceable observational documentary hobbled by some awkward authorial interventions, which only provokes much of a reaction once you realize it’s supposed to be the future.

Makala’s opening minutes are its strongest, as Gras’ camera trails his protagonist, a charcoal burner called Kabwita, in a series of clipped tracking shots that lead through the Congolese countryside to a tree waiting to be felled, the only accompaniment the roaring wind. Once the tree has been hacked into pieces though, the atmosphere of hushed exertion is broken by the mournful, mood-guiding string music that now strikes up, the first example of Gras’ unwillingness to let Kabwita’s actions speak for themselves. As Kabwita returns home to his wife and child, heads out again to burn the wood he’s collected, and eventually piles his shaky bike high with sacks of charcoal to sell before making the trek into town, other such moments of stage-managing proliferate: the written-feeling dialogue scenes, the rats that pop up in cooking pots not just once but twice, the decision to shoehorn Kabwita’s everyday toils around one neatly delineated quest, ever more frequent stabs of semi-manipulative music.

Gras does at least manage to find various other images to articulate the dimension of Kabwita’s efforts, most strikingly when a passing bus reveals the snail’s pace at which he’s moving. Yet the quest narrative and the predictable setbacks it contains ultimately tighten their grip on the film, to such an extent that Kabwita’s individual fate soon feels like just another vehicle for putting across the same eminently valid point made countless times before: the path to prosperity is a rocky one, not least in Africa. There’s nothing wrong with restating the facts, but wasn’t innovation about trying to say something new?