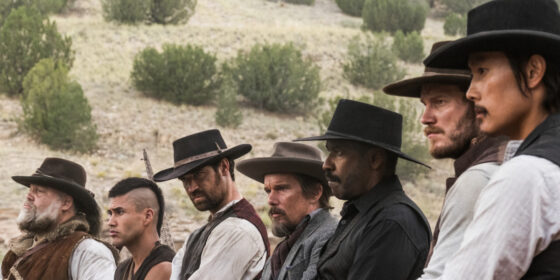 Diversity, thy name is The Magnificent Seven 2016: what was once a group of white guys saving a town of poor Mexican campesinos is now a veritable United Nations of the West. The assemblage of these gunfighters is the apotheosis of the Obama Era in the movies. The assemblyman and leader is Denzel Washington, once again getting together with director Antoine Fuqua. Washington’s position players include a Mexican outlaw (Manuel Garcia-Rulfo), a young Comanche warrior (Martin Sensmeier), and a master of knives who could be Korean or Japanese (likely the latter, since Lee Byung-hun does his best Mifune Toshiro impersonation). The white guys in the crew are in the minority: Chris Pratt doing Steve McQueen, Ethan Hawke doing Robert Vaughn, and Vincent D’Onofrio as an old barrel-chested bear of a mountain man who seems to belong in a different movie than this one, but whose few minutes of screen time are eccentrically memorable.

The original 1960 movie directed by John Sturges is full of problems, some of them political (Mexicans needing white saviours chief among them), and the reboot written by Nic (True Detective) Pizzolatto and Richard Wenk comes up with an improved set-up. This time, the Seven are up against a ruthless capitalist (Peter Sarsgaard) who’s taken control of the town of Rose Creek in 1879 to exploit nearby veins of gold. His intention is total ownership by any means necessary. Marxist scriptwriters of the pre-McCarthy period couldn’t have come up with a more venomous face of unbridled capitalism.

Even here, diversity drives the narrative. It’s a woman (Haley Bennett) who hires the Seven and makes sure her town of mostly weak-kneed yellowbellies isn’t wiped out. The western is cinema’s most consistently fascinating genre because, among many other reasons, no other genre better reflects back to the culture what it believes in at that moment. In that sense, the new version is a real western, but it also can’t shake the feeling that everything here is pure dress-up fantasy—a kind of fantasy far beyond the western’s great tradition of the revenge fantasy fulfilled. There’s a fine line, as Sergio Leone once told me, between the operatic and the absurd, and this Seven runs roughshod over it.

One final note: just as it’s been noted ad infinitum that the western is dead (in fact, they keep trying to kill it off, but it just keeps coming back to life), it’s a truism that Hollywood movie music ain’t what it used to be. Probably the most lasting imprint of the original Seven is Elmer Bernstein’s great, galloping, Coplandesque score. It reappears in the new version at the start of the closing credits, which is now a programmatic device of Hollywood do-over projects with classic theme tunes, from Mission: Impossible (1996) to Star Trek (2009). Surrounding the snippet of Bernstein’s indelible theme, though, is a lumbering, bland score by the late James Horner (perhaps his last) and Simon Franglen that actually has the nerve to rip off bits from another classic score: the haunting trumpet echoes of Jerry Goldsmith’s music for Patton (1970). It’s hard to think of a better example of Hollywood running out of ideas.