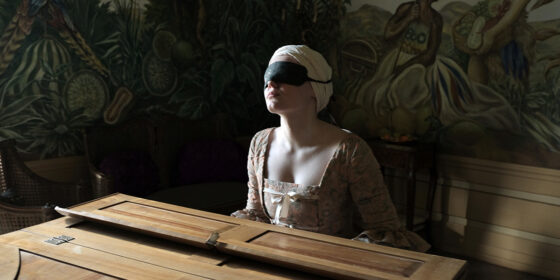 A film that would make a fine double bill with either Jessica Hausner’s Amour fou or David Cronenberg’s A Dangerous Method, Barbara Albert’s Mademoiselle Paradis is a subtle and intelligent film about the historical crisis of female subjectivity and the various men who attempt to control that emerging identity. At the height of Habsburg Austria, Mlle. Theresa Paradis (Maria Dragus) is a blind harpsichord prodigy, a problem that her arriviste aristocrat parents do not quite know how to solve. Her father (Lukas Miko) wants her to cultivate her talent, presuming there is wealth and fame to be gained from it. Meanwhile, her mother (Katja Kolm) finds Theresa’s swaying and rolling of eyes to be unattractive, and wishes that Resi could just be another “normal,” sighted girl. (Neither of these desires, of course, are ever spoken aloud.)

The crux of the film arrives in the form of an encounter with a radical new Austrian physician, Franz Mesmer (Devid Striesow), he of hypnotism fame. He treats Resi with a method that consists of shifting her internal humours, fluids in the body that cannot be seen, touched, or weighed. In the midst of this “treatment,” Resi regains her sight. As she learns how to see a world she had only heard and touched since the age of three, she begins to assert her will in complicated new ways. Dragus’ performance is a study in precision within a tightly controlled range, displaying Resi’s small triumphs and rebellions as submerged tremors.

For their part, Albert and screenwriter Kathrin Resetarits (herself an avant-garde filmmaker) perform the exceptional task of allowing us to see the historical limitations of these 18th-century individuals within a fair and proper context. In the opening sequence, for example, as we see Resi play, her feeling for music and her blindness are shown as somatically connected: watch her movements without the music, and she appears to be having sex. So we can surmise the etiology of Resi’s at-least-partly hysterical blindness. But Mademoiselle Paradis never gives in to smugness or self-congratulation: rather, we see Resi and Mesmer as figures stranded inside their own sedimentary layers of a much broader archaeology of knowledge. Without a vocabulary of repression, Mlle. Paradis becomes a fascinating symptom of her age.