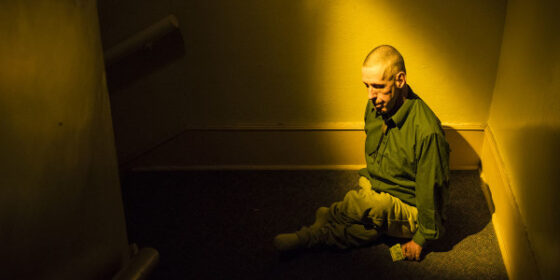 Set and shot during the last days of the 2010 Vancouver Winter Olympics, in Luk’Luk’I Wayne Wapeemukwa attempts to puncture the veneer of Canadian nationalism by turning away from the event’s image of national prosperity and togetherness in order to focus on marginalized communities. Working with a cast of mostly nonprofessional actors, Wapeemuka (whose previous TIFF-screened shorts featured the same collaborators) uses the falseness of mainstreamed Canadian pride as a backdrop for characters dealing with poverty, racism, illness, and misogyny—the legacies of the capitalist colonial history upon which the country was founded.

An earnest attempt to bring social realities to the forefront amidst an onslaught of patriotic hypocrisies, Luk’Luk’I does not fully coalesce. Characters explicitly stating the nature of their oppression via dialogue feel fetishized and reductive; they are objectified in their political situations, transformed into symbols rather than people. Though the actors play versions of themselves, the pull of authenticity is never enough to make their onscreen depictions less cartoonish. In seeking to grapple with a very necessary discussion, the film verges into the exploitative, offering up a constant flow of tragedies big and small, from seemingly superficial encounters with obnoxiously rude hockey fans to visceral scenes of animal cruelty, brutal and disturbing violence (including the kind that often passes unnoticed in Canadian media and governmental policy) to the murder of sex workers.

Ambitiously, Wapeemukwa attempts to add elements of unreality to his film, creating a stark contrast to the predominant near-documentary style. While this yields one of the best sequences, a fantasy skating scene (one of several pop-scored interludes), for the most part it adds very little; never illuminating the characters beyond the immediacy of their respective problems, these interventions play as contrived experiments. To be sure, Luk’Luk’I is engaging in something extremely important, being a rare Canadian film attempting a wide-scale national autocritique. But while Wapeemukwa’s contention that beneath the long-held image of Canada the Good there lies a reality of congenital inequality is sorely needed, it gets lost in formal experimentation and political heavy-handedness.