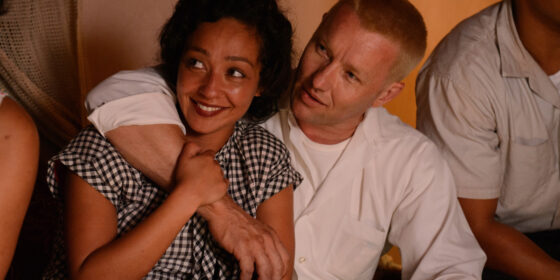 There’s little question that Jeff Nichols’ Loving deals with one of the most fascinating, and little known, incidents in the history of American racial strife. Inspired by Nancy Buirski’s documentary The Loving Story (2011), Nichols retells the remarkable saga of Richard (Joel Edgerton) and Mildred Loving (Ruth Negga), an interracial couple whose 1958 marriage (made official in Washington, D.C.) was declared illegal in their home state of Virginia by dint of a statute called the “Racial Integrity Act of 1924.” It’s remarkable that, a mere 58 years ago, the Lovings could be arrested and jailed for the crime of “miscegenation.”

Nichols has called the Lovings’ relationship “one of the purest love stories in American history,” and he has crafted a peculiarly antiseptic melodrama from this raw material. It’s not necessarily a mistake for Nichols to focus on the couple’s admirably durable marriage and de-emphasize the political anger that fuelled the Civil Rights era and reduce it to a mere backdrop for the central love story, but the film is marred by a few rather odd tonal shifts. Nichols’ penchant for using bucolic Southern landscapes to reiterate the purity of the Lovings’ passion possesses a Malick-Lite quality, but the film’s later sequences veer into more conventional territory traversed by numerous liberal “social conscience” movies as attention turns to ACLU lawyer Bernie Cohen’s (Nick Kroll) quest to have the Virginia ruling overturned by the US Supreme Court. Despite this aesthetic morass, Edgerton and Negga’s performances are brilliantly crafted, and nearly offset some of the film’s more heavy-handed interludes.