Under Her Spell: Anna Biller’s The Love Witch 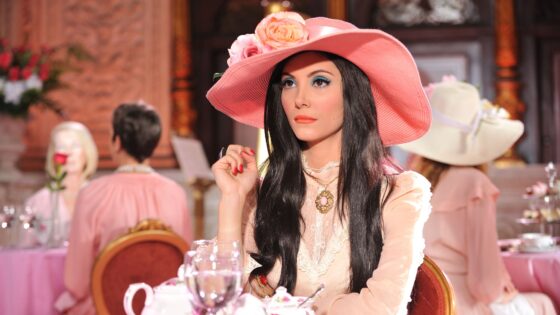 “I must say, to my great regret, the cheapest tricks have the greatest impact.” – Georges Méliès

Anna Biller’s highly accomplished second feature The Love Witch is a silly, frilly film, but one that regards silly things—a set of cultural assumptions about feminine puffery, the pleasures of being exquisitely, unapologetically femme—with deadly seriousness. This is the story of Elaine (Samantha Robinson, in a breakthrough performance), a white witch who has had bad luck with men in more ways than one. But at the same time, The Love Witch seems to suggest that she’s every woman, and perhaps even that “woman” is the basic condition of us all.

Elaine casts spells to make men fall in love with her, but her love spells are racking up a body count. Having gotten into some trouble back in San Francisco (a major centre for the magick arts, of course), she has taken advantage of a house-sitting opportunity up in Eureka, CA, which, it turns out, has a pretty hopping Wiccan scene all its own. The crises Elaine fled Frisco to avoid begin repeating themselves in Eureka, and the local coven, which includes some shady characters from her past, is all too eager to bring this striking, seductive witch into the small-town fold. As we observe the Love Witch in action, we’re almost guaranteed to wonder why a woman as attractive and charismatic as Elaine would feel she had to resort to supernatural means to get men to fall in love with her. Is it a damaged past? Generalized insecurity? A belief that men are incapable of real love? All of these reasons are hinted at, but none is definitively settled upon, giving the sense that Elaine’s needs, at base, are fairly normal. Her witchcraft merely serves as an amplifier.

Elaine, after all, only wants to be loved. As it happens, her love kills, but not in the gynophobic ways typically ascribed to the female subject. It’s not that her desire is some gaping Lacanian maw into which hapless male objets are slurped down like prey. Nor is Elaine the classic femme fatale, using her feminine wiles to extract some particular commodity from otherwise powerful men. True, Elaine partakes of these personas to some degree, but none of them defines her. She understands that her sex appeal can be utilitarian, but she is no viper. The only thing that makes her, and The Love Witch, seem uncanny or dangerous is that Elaine’s own desires are the organizing principle of the film. That is, she possesses that most legendary of weapons, “the Gaze.”

Biller’s brilliance here is that witchcraft, front and centre as the subject matter, is of course an allegorical tool. It’s cinema that Elaine/Biller controls without authorization, that empowers her. And perhaps more radical still, they do this not by adopting the outward trappings of masculine power, but by fully embodying the performative place of the femme. The Love Witch is so exaggerated in its twin concerns—magicks and genteel, womanly behaviour—that they come to intersect imperceptibly, even when they don’t fit together at all. (Elaine’s garish, Lovecraftian self-portraits, for example, or her mad-scientist laboratory set-up, come to seem completely of-a-piece with her wide brimmed sun hats and her pinky extension in the all-women’s tearoom.)

Biller is a preternaturally gifted filmmaker whose unique formal approach is thoroughly in service to an intellectual worldview. From the first shot, The Love Witch announces its artifice, its saturated faux-Technicolor combined with retro-’50s/proto-’60s art design and costuming. Virtually every aspect of Love Witch’s mise en scène was handcrafted by Biller, which speaks to a kind of rigour at work both inside and outside the diegesis. In Elaine’s universe, everything is enchanted and electric. Even Biller’s exteriors, which frequently resemble the coastal vistas of Vertigo (1958) and the sylvan surroundings of All That Heaven Allows (1955), seem to “pop,” as if their very proximity to Elaine makes them lusher and more erotic.

Again, Biller’s control over her own filmic world parallels Elaine’s witchcraft in that both are pervasive and thoroughgoing. When a police sergeant (Gian Keys) investigates the death of Elaine’s last lover (Jeffrey Vincent Parise) and pointedly interrogates her about her witchy ways, Elaine, genuinely wounded, explains that witchcraft is her religion and she shouldn’t be mocked or persecuted for it. I have no idea whether Biller herself practices witchcraft, and it hardly matters. And it would be a glib parallel to say that filmmaking is her “religion.” But The Love Witch does demonstrate the power that resides in matriarchal practices that are frequently scorned for their ostensible lack of seriousness.

We observe this in Biller’s process, with her unusual focus on handicraft and attention to detail. Other filmmakers can be thought of as world-generators (cf. Wes Anderson, Roy Andersson, Terry Gilliam, Peter Greenaway), and as with Biller, we sense that their diegetic life-worlds end just outside the frame. But where those directors construct large-scale mise en scène, based on architecture, set design, paintings, flying creatures, and the like, Biller works smaller and by hand. This approach has an unavoidably feminist undercurrent. There are elements of The Love Witch that, on a typical film shoot, are secondary considerations at best, but that are units of primary meaning here: music cues, art direction, set dressing, and costumes. (Although Biller is not listed among the five makeup artists in the credits, I’d be shocked if she did not have a strong hand in organizing the shape and tone of Elaine’s neon blue shadow and mascara. Robinson’s eyes have the dangerous potency of long-range missiles.)

Part of Biller’s involvement, of course, is endemic to low-budget independent production. (Biller also edited The Love Witch, and she was similarly a Jill-of-all-trades on her 2007 debut feature, the suburban-retro sex romp Viva.) Biller’s aesthetic is quite different, to say the least, than that of earlier feminist artists who were intent on bringing craftwork (e.g., “women’s work,” feminized labour) into dialogue with high cultural production—Faith Ringgold’s quilts, Judy Chicago’s ceramic plates, Eva Hesse’s hanging woven constructions. But there is an impulse toward meticulousness, the possibility of communication through small stitch and minor detail, that The Love Witch certainly shares.

And what of Elaine herself? Well, she is every bit as conflicted as the film is complex. Professing to be “in love with love,” she does not simply enjoy being a girl. She locates her power within her femininity, something she wields with shocking passive-aggression. Biller doesn’t waste very much time on Elaine’s backstory, and this is strategic. With almost Soviet-style flash-framing, we see Elaine being gang-raped and subject to ritual abuse in her past, this violation tied to witchcraft (she’s a “virgin sacrifice” at a coven gathering) and to those she once trusted.

While neither Biller nor The Love Witch profess to offer any directives as to how other women should heal from their own traumas, the film does show Elaine as taking a rather blasé attitude toward her victimization, something formally mirrored in the brevity with which it’s shown. But these events stay with her and, I would argue, have formed her into a highly unique subject. She has embraced not her victimhood but the passivity that was thrust upon her, in the form of extreme femme-ininity. Her demure exterior, of course, belies her actual ability to get what she wants, to affirm her own desires as worthy and viable. Her passivity is an active one, one that she organizes and orchestrates behind the scenes, using the toil-and-trouble alchemy of witchcraft. And so, ultimately Elaine is a kind of soft-femme top, calling the shots and making it seem like it was our idea all along. In life, as in the cinema, we call that “seduction.”