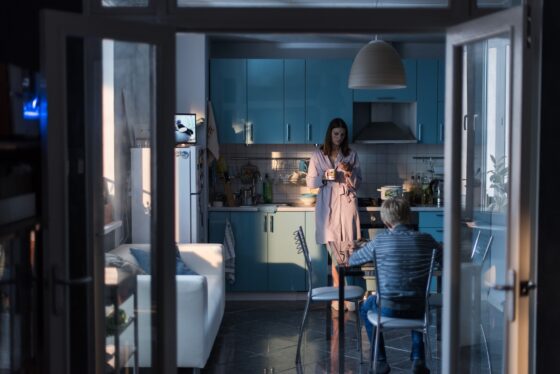 From all outward appearances, the Russian director Andrey Zvyagintzev is a Putin-era incarnation of what was known during the Soviet era as a “dissident”: Leviathan his previous prize-winning film, did after all manage to upset the powers that be, especially the Russian culture minister Vladimir Medinsky. Produced, unlike Leviathan, without the assistance of the Russian government, his most recent film Loveless (which won the Jury Prize at Cannes in May) has been touted as a trenchant critique of Putinesque greed and authoritarianism. Yet despite the hype, Loveless is a considerably more muddled movie than its reputation would lead one to believe. The disintegrating marriage of Boris and Zhenya—the melodramatic core of Zvyagintzev’s convoluted narrative—is apparently meant as a somewhat opaque allegory of Putinesque malfeasance. When the couple’s young son Alyosha goes missing, the parents’ grudging search for their wayward son, as well as the bureaucratic impediments to finding the child, appear to be a somewhat fuzzy indictment of Donald Trump’s favourite kleptocracy.

Yet for many viewers, what will remain stuck in their minds is not Loveless’ critique of Putinism, but rather its relentless misogyny: Zhenya is depicted as an unredeemable harridan and, as a consequence, she emerges as more of a villain than any politician or soulless oligarch. Though Zvyagintzev inserts some news reports detailing the Russian government’s disdain for the Ukrainian regime which seem intended to draw parallels between personal strife and political turmoil, they end up trivializing the political malaise they are purportedly illuminating.