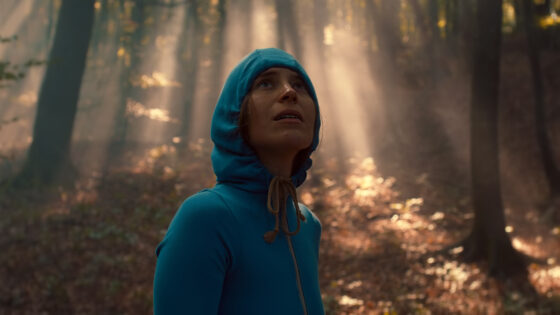 At the level of plot, Klaudia Reynicke’s second feature never deviates from its empowerment narrative. After putting on a comfortable one-piece tracksuit and putting away hope her family will safeguard her every move, an agoraphobic millennial steps outside and overcomes obstacles, all while retaining her abstract annoyance at the world. But with the caveat of its uninspired camerawork, Love Me Tender is inclined toward the unnatural, flipping through tones less to jolt viewers than to keep pace with a committed star performance.

Barbara Giordano’s work as Seconda — off her meds, alone in her parents’ house, motivated only during her intermittent thoughts of suicide — is the kind of carefully built-up acting that suggests a sympatico connection with her director. Giordano’s the time signature-switching drummer Reynicke can modulate around, and, to be sure, this is a film with dreams, dances, psychological compression, and broad comic tangents.

Despite this excellent interplay with her star, Reynicke, who also wrote the script and is co-credited with the music-blog-pop score, flattens narrative throughlines that oversimplify Seconda’s ultimately not-that-surreal journey and whatever Love Me Tender might be trying to portray about mental health. (You’ll never guess who the similarly dressed young girl taunting her in recurring scenes turns out to be.) This is an assured, scaled-down work, but one that also bears some resemblance to the seriocomic stylings of The Shape of Water (also, let’s just say that Seconda cares for the family cat about as well as Deneuve did the rabbit in Repulsion).

Whatever one feels about the tired cinematic lineage of outsiders inheriting the earth (and Seconda strides out of the house with as much alien precision as Peter Sellers in Being There), there is a more unpredictable film in here; it’d be easier to see, if Reynicke hadn’t written most of it out by the final act.