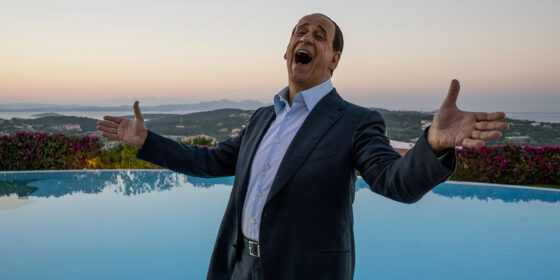 Because of the various creative ways that capital funds cinema, decadence and corruption are never too far away from eating away at its heart. So, beware of movies about decadence: these are movies that tempt fate, walk right up to the line of becoming the very thing they’re observing or satirizing, and often tip over and fall in the fire.

Paolo Sorrentino is a prime example of Late Auteurism (now that this dubious theory has reached its own decadent stage), a period dominated by a generation subsumed by past masters whom they have no chance of surpassing. In Sorrentino’s case that would be Fellini, who, though he’s hardly my idea of a master, certainly masters Sorrentino. If it wasn’t apparent in Il Divo (2010), it reached full flower in The Great Beauty (2013) and in various aspects of his tendentious, episodic The Young Pope (2016)—by this I mean attitude as much as any particular camera tricks, though Fellini’s favorite tracking-zoom-pan shot is evident in Sorrentino’s latest look at Italian decadence, Loro.

With Sorrentino, as with Fellini, the feeling persists that as much as these directors aim to skewer the figures promoting social and cultural rot—whether it’s the celebrity/paparazzi machinery in La dolce vita (1960), the disco-ing Romans of The Great Beauty, or the bimbo-erupting excesses of former Prime Minister Silvio Berlusconi in Loro—they would love to be part of the party. Unlike Antonioni draining his pool-party sequence of fun in La notte (1961), Sorrentino’s similar attempt at a stupid, empty pool party in Loro is shot with such a leering, drooling male gaze at writhing, nubile, bikini-clad bodies that the enterprise begins to appear like a moviemaker’s excuse to indulge in his own private Berlusconian fantasies.

Sorrentino has trimmed an hour from the three-hour-20-minute saga released theatrically in Italy in May in two separate parts, which sounds beyond awkward, but the compressed feature at least has the virtues of continuous flow and breakneck pace. There’s also a proper emphasis on the astounding Toni Servillo, an actor of uniquely theatrical physical and vocal gifts—the closest thing among current movie actors to someone who can be fairly termed a force of nature. Servillo pulls an initially stupid movie into something more ironic and telling: a study of Berlusconi’s self-loathing and, in a finale that addresses the catastrophic L’Aquila earthquake (which Sorrentino looked at before in a 2009 omnibus film), a nod to contemporary human tragedy. But Sorrentino’s heart doesn’t appear to be in the serious stuff: once all the female flesh fades from view, Loro goes limp.