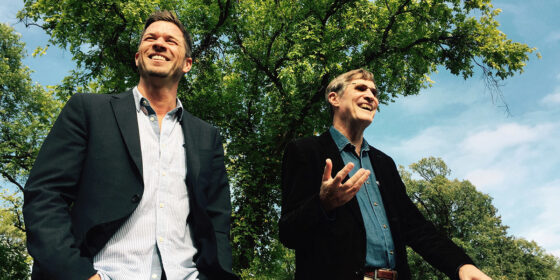 Canadian filmmaker Matt Embry is living proof that one can do well despite being stuck with multiple sclerosis, provided that one circumvents the medical establishment’s augur of incurability by diversifying sources of information on the causes and treatment of the disease. This is the main takeaway of Living Proof, a documentary that tackles the politics of the condition more than its nature and effects.

We may want to pause here for a second. MS is not rare (more than 2 million people are affected worldwide), but awareness about it amongst the general public is hardly prevalent. Knowing this, one may regret that Embry, who was diagnosed with MS at the age of 19—younger by at least a decade than the statistical average—and has lived with it for 20 years, appears to direct his militant exposé at an already fairly informed audience, leaving others unsure about what they’ve learned about this still mysterious illness. Or does he desire to plunge the viewer into the kind of confusion that a newly diagnosed patient experiences?

MS is an auto-immune, neuro-degenerative condition that gradually damages the myelin that protects neurons, turning the nervous system into a partially unsheathed electrical circuit. A first flare-up often involves the disease’s most common symptoms of numbness and tremor in the limbs, leaving bewildered patients possibly wondering whether they are undergoing a precocious form of arthritis. They then learn that relapses are followed by periods of remission, and that their state may evolve, slowly or not (that’s the catch), towards a bleak horizon of crippling disabilities, both physical and cognitive. Uncertainty becomes a central part of life, and this has widely diverse effects on people, ranging from depression to a renewed urgency to carry out projects.

But Embry is not trying to increase general awareness in order to raise funds for the Canadian MS Society or the pharmaceutical companies that provide medicine: rather, he suspects these entities of collusion and of casting doubt on certain promising alternative therapies that would encroach on the lucrative market of existing treatments. What he does is tell his own story, how he decided to go against the flow and use the internet to share his and his father’s conclusions that a combined regimen of dietary restrictions and exercise has kept him miraculously stable for all these years, allowing him to be a father and a filmmaker.

Mood swings being among the condition’s many possible symptoms, is it possible that Matt’s tendency to shed tears could be partially a result of MS? He doesn’t linger on this, but when, by the end of the film, you hear him promise at a public speech that he’s “not gonna cry,” you can’t help smiling. The director in him had the ability to cut wherever he wanted, but overwhelming surges of emotion are not only part of who he is: they convey an empathy that he says is missing back there in the labs. The severely ill, on the other end of the spectrum, have no time to lose (a discrepancy also denounced in Robin Campillo’s BPM). In this regard, the score’s occasional countdown-like ticking sound is appropriate, if ungraceful, but the typically decorative use of music feels intrusive: if you’re going to break down in the street while on camera, you may want to register the noise (or lack thereof) that surrounds you in that precise moment. Alternatively, why not indulge in your favourite tune and turn up the volume. The life-saving discipline that Embry promotes is ascetic enough.