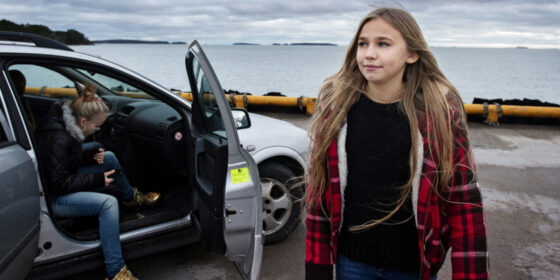 Realizing a tightly telegraphed narrative with on-the-fly camerawork and spontaneous realism, Finnish director Selma Vilhuen’s Little Wing is equal parts sensitive and senseless. The story’s set-up is based on a dichotomy that, thankfully, the film complicates as it goes on. Varpu (Linnea Skog) is a 12-year-old wise beyond her years, and her single mother, Siru (Paula Vesala), has the maturity of an adolescent. After Varpu steals a car with her delinquent friends and drives off to find her father in a city hours and hours away, Siru and her new boyfriend panic and frantically search for the girl.

Best known for her Oscar-nominated short Do I Have to Take Care of Everything? (2012), Vilhunen has a sympathetic gaze which separates Little Wing from the puke-in-mouth schmaltz which could reasonably be expected from the film’s premise. In a subtle and excellent red herring, Varpu mistakes a wealthy businessman for her father. Bringing the plot to a standstill, giving us a peek into our protagonist’s wish-fulfilling fantasies and baiting cliché before correcting itself with a downbeat and more truthful twist, it’s an airy diversion in a film that’s calculated to a fault. Although the cast is excellent, the performers are shackled by the formula they’re working with. Little Wing can’t reconcile its humanism with its contrived structure, nor its affinity for characters on the fringes with its overly economical plotting. The film nosedives as often as it soars.