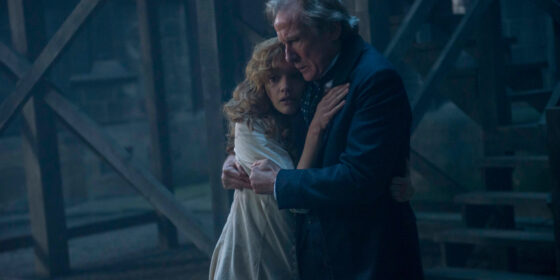 Edgar Allen Poe, the creator of the detective story, and Conan Doyle, its popularizer, conceived their protagonists as psychoanalysts as much as investigators. The framework they established was male-dominated and placed women only in misogynist types. Juan Carlos Medina’s film is a feminist deconstruction of how we record history and a critique of the sexist conventions in Victorian crime stories. The film reverses the male paradigm, subverts our prejudiced expectations, and deals with more than a handful of politically-charged red herrings. In other words, it psychoanalyzes the psychoanalyst.

As these things tend to go, there’s a Jack the Ripper type on the loose in Victorian England. The film is set in London’s Limehouse district, which was populated mostly by Jewish immigrants who, in the film, believe a mythical Golem is responsible for the increasing amount of murders in the area. John Kildare (Bill Nighy) is put on the case. Convinced he can save Lizzie (Olivia Cooke), a young woman headed to the gallows for poisoning her husband, John investigates the series of murders with the presumption that the two cases are somehow connected and that Lizzie is innocent.

The Limehouse Golem is an incomplete and shoddy adaptation of Peter Ackroyd’s novel. The film crams in a prodigious amount of plot at the expense of characterization, the specifics of its world, and an exploration of its themes beyond mere implication. The feminist critique is present in the dialogue and narrative structure, but it hardly feels integrated into the performances or the images. For all that Medina does with it, The Limehouse Golem might just as well have stayed on the page.