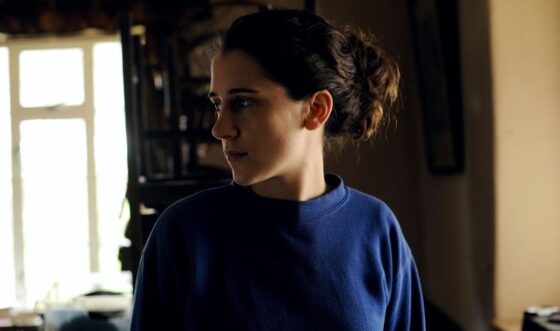 A promising debut hobbled by the perhaps inherent difficulties of making a first feature, Hope Dickson Leach’s The Levelling has the mood, tone, and overall feel of so many British TV procedurals of late. Granted this is a family tale, not a police story, but like recent entries such as Southcliffe, The Fall, Broadchurch, and even New Zealand’ s Top of the Lake, a rural tragedy brings an outsider, most often a prodigal figure, in from the city. In most cases, they are long-absent adult children, brought forcibly back into the fold. This inevitably reveals long-simmering resentments, recriminations, and buried secrets. What’s more, these stories usually entail some direct relationship to the land—a body of water, a community disrupted by new build, or some other geographical “situatedness”—that runs through the entire program as a hard-drilling metaphor.
The Levelling operates in this vein, but is only 83 minutes long, so one comes away with a sense that problems and resolutions, the roiling and the implosion, are all on fast forward, too cramped and not given space to accumulate the mood that would deepen their impact. Clover (Ellie Kendrick) left her family dairy farm over a decade ago to go to veterinary school, leaving her father (David Troughton) and brother to manage things. She comes back following her brother’s suicide by shotgun, mere hours after Dad was set to hand the farm over to him. Amidst the usual “why weren’t you heres” and “you think you know everythings,” one finds an intriguing performance by the awkward, large-eyed Kendrick, her pale skin and vaguely Semitic visage serving to mark her as an outsider in every sense. There is an impressive attention to both the flood-saturated muck and the industrial integrity of the small farm, lending The Levelling a fine sense of space. The film is ultimately a one-track proposition, but keep an eye on Leach.