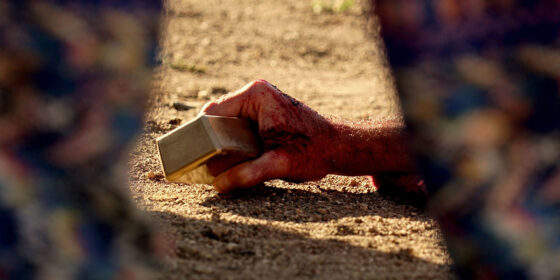 Having plunged as deep as their knives could go into the long-dead corpse of the giallo genre in Amer and The Strange Color of Your Body’s Tears, Hélène Cattet and Bruno Forzani now forge a kind of hybrid of the spaghetti Westerns and Italian crime films of the late ’60s, stripping out nearly all story and keeping the sublime transfixion on material iconography and brute behaviour. Adapted from Jean-Patrick Manchette’s lean debut novel from 1971 (co-written by Jean-Pierre Bastid, who, like Manchette, was also immersed in genre cinema), Let the Corpses Tan opens with target practice shooting up neo-expressionist paintings, introducing the two groups (artists and gangsters) hiding atop a Corsican redoubt. After a whip-fast gold heist along the coast (executed by Cattet and Forzani with a fiercely staccato musical precision) attracts the local police, the mixed-class gang holes up in the sun-baked ruins to fight first against the law and, soon, against one another.

What follows is an elaborate choreography: inside the story, a dance of desperate people exchanging bullets and positions among the sharp rocks and crumbling buildings; and across the screen, an ecstatic cavalcade and cataloging of gleaming guns, fantastic injuries, shifty eyes, squib bursts, and deliriums of gold (and golden showers). That one artist is a painter (Elina Löwensohn) and the other a writer (Marc Barbe), the former falling into daydreams of being inside the world of the latter, allows Cattet and Forzani to festoon the vibrant violence with a psychedelic touch, the bloodily nihilist showdown a mind game in both senses. Shot on Super 16 CinemaScope in deliciously lurid colour by Manu Dacosse, backed by old music cues by Ennio Morricone (who else?) and featuring a sound design heavy on panting, scrunched leather, and the click-clack cocking of firearms, Let the Corpses Tan transforms genre pulp into pop art, keeping fetishism intact and frequently erupting into abstraction.