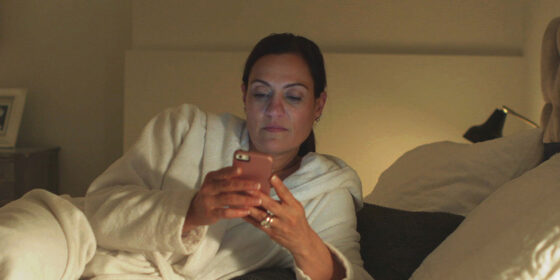 What can be said about Renée Beaulieu’s Les Salopes, or The Naturally Wanton Pleasure of Skin that isn’t already conveyed in the title? The Québécois filmmaker and University of Montréal film professor’s second feature—which concers a biologist whose research on the potentially scandalous connection between desire and dermatology—sits at an awkward juncture between a position paper and the kind of austere erotic drama Canadians of a certain age might remember catching late at night on the Showcase Revue back in the ’90s. The film is steeped in artful, slow-motion interludes that purport to capture the ecstasy of the protagonist’s sexual liberation—from what, beyond a comfortable upper-middle-class existence and a boring husband, it’s hard to say—and canned intellectual debates over wine and tasteful décor about the nature of sex, power, and gender that wouldn’t be out of place in a Denys Arcand movie.

In that mix of academic hypothesis and extracurricular exploration, the film feels like a grey B-side to Claire Denis’s Un beau soleil interieur, a high-minded Roland Barthes adaptation that benefited from the filmmaker’s quintessential tactility, curiosity, and warmth, qualities conspicuously lacking here.    In Beaulieu’s defence, she’s clearly after something frostier, in concert with Brigitte Poupart’s flinty lead performance as Marie-Claire, she of the eponymous naturally wanton pleasure. There’s an impressive synchronicity between the desaturated cinematography and bone-dry mise en scène and Marie-Claire’s compulsiveness in indulging all her sexual whims.