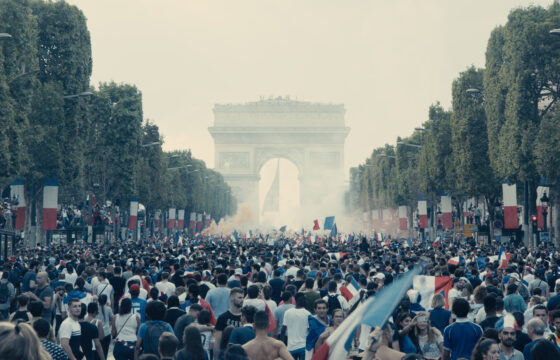 The extreme tension between residents and police in the French banlieues seems to push the boldest filmmakers to go beyond the gritty realism that typical “urban” stories often cling to. Mathieu Kassovitz’s La Haine not only adopted black-and-white photography and a propulsive editing style, but also primitive drone shooting: a camera placed on a remote-controlled mini-helicopter flew out of a window to capture a view of the buildings from the air. In his promising debut feature Les Misérables, Ladj Ly pays homage to La Haine by taking its expressionist style into the 21st century. When a nerdy boy’s drone inadvertently captures a violent incident between a young man and officers of the BAC (Brigade Anti-Crime), the constant anxiety that animates the Montfermeil suburb breaks out into a full-blown riot. Stuck in the middle is Brigadier Stéphane, played with disarming sensitivity by Damien Bonnard (Staying Vertical), a new addition to the team who resists the machismo and dangerous arrogance of his colleagues, but has to concede his own naiveté: people want a little less conversation and a little more action. Like the similarly explosive Do the Right Thing, Les Misérables has surreal moments verging on comedy that heighten the sense of unpredictable brutality rather than distract from it. The drone footage, for once, feels integral to the story, highlighting as it does both the use and the limitations of a bird’s-eye view on systemic violence. The dots seen from a great height are not statistics in a game with slanted rules but real, individual people—and in keeping with an older and greater French cinematic tradition than that of Kassovitz, Ly demonstrates that everyone has his reasons.